ARE YOU BEING BLESSED BY THE PSALMS? 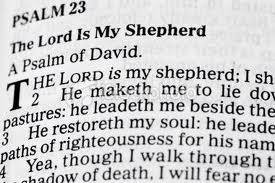 Psalm 23
King James Version (KJV)
23 The Lord is my shepherd; I shall not want.

2 He maketh me to lie down in green pastures: he leadeth me beside the still waters.

3 He restoreth my soul: he leadeth me in the paths of righteousness for his name’s sake.

4 Yea, though I walk through the valley of the shadow of death, I will fear no evil: for thou art with me; thy rod and thy staff they comfort me.

5 Thou preparest a table before me in the presence of mine enemies: thou anointest my head with oil; my cup runneth over.

6 Surely goodness and mercy shall follow me all the days of my life: and I will dwell in the house of the Lord for ever.

We are tempted to turn to the comforting book of Psalms in order to pacify our thirst for justice, but are you reading the right Psalm for your situation?
-What is your situation
-Will your situation be helped if you read the wrong Psalm?
-Are you guilty of the offense you are reading the Psalm for?
– What is God’s justice?
Take Psalm 23, it’s a common consensus that people read this Psalm when they are in fear but will Psalm 23 protect you from what you fear?
This Psalm was written by David when he was called by Saul to play his harp for him and we see this in 1 Samuel 16 verses 17 through 19.

17 “All right,” Saul answered. “Find me someone who is good at playing the harp and bring him here.”

18 “A man named Jesse who lives in Bethlehem has a son who can play the harp,” one official said. “He’s a brave warrior, he’s good-looking, he can speak well, and the Lord is with him.”

19 Saul sent a message to Jesse: “Tell your son David to leave your sheep and come here to me.”

David represents this in Psalms 23 in the 5th verse
5 Thou preparest a table before me in the presence of mine enemies: thou anointest my head with oil; my cup runneth over.
David was annoited by Sammuel prior to him being called by Saul to comfort him. He knew he would be in the presense of his enemy but he had God’s word that this was where He wanted him .This man of God was being placed not only in a position where God wanted him but most importantly, David knew he was expected to be righteous as professed. He was not kin to Saul, but was annoited by God to rule for the glory of God. It was not for the glory or honor of David. Samuel 16

1 And the Lord said unto Samuel, How long wilt thou mourn for Saul, seeing I have rejected him from reigning over Israel? fill thine horn with oil, and go, I will send thee to Jesse the Bethlehemite: for I have provided me a king among his sons”. 7 But the Lord said unto Samuel, Look not on his countenance, or on the height of his stature; because I have refused him: for the Lord seeth not as man seeth; for man looketh on the outward appearance, but the Lord looketh on the heart”.

1The Lord is my shepherd; I shall not want.
2 He maketh me to lie down in green pastures: he leadeth me beside the still waters.

David was declaring that he knew first hand that that God had given him favor and he knew that he would never lack. God was his provider , his shield, his restoration and all this would be still for God’s glory;

3 He restoreth my soul: he leadeth me in the paths of righteousness for his name’s sake.

As a prophet , David knew that Saul would become his enemy.Not because he would find out about David’s favor, but because as a man crippled by an evil spirit, David’s presence and light caused the devil to become uneasy and in no time Saul would know that he was in the presence of God’s chosen one. The presence of death and evil were not to concern David. God was his rod( protection) , his staff( his guide) and in troubled times God would comfort him. There was no fear in David, he was confident in the God he served and knew he was in danger but would come out unscathed.

4 Yea, though I walk through the valley of the shadow of death, I will fear no evil: for thou art with me; thy rod and thy staff they comfort me”.

Becoming King, was David’s destiny and David knew would be exhalted in the presence of his enemies.He was very aware that he did not deserve what God had given him because it was more than his portion.

5 Thou preparest a table before me in the presence of mine enemies: thou anointest my head with oil; my cup runneth over.

For this favor David promised God to be righteous and in doing so he would have God’s goodness and mercy all his days . Eternal life would be the portion of David’s cup.6 Surely goodness and mercy shall follow me all the days of my life: and I will dwell in the house of the Lord for ever.
Psalm 23, in its dept was a declaration , a promise, it s a Psalm of confidence and bravdo. David was glorifying God and had no fear. The path would be dangerous but importantly, the path was what was chosen for him by God. He was annointed to rule and even though death would be in his shadows, it would never consume him. God had already taken care of it all and this he knew.

Psalm 23 ends with a promise, to serve God and be in his house in order to receive his goodness and mercy.For us the readers of these Psalms, it is important to consider our situation and not utter useless utterances to God,we must speak to God with knowledge and clarity , if not, we sin. So please read with caution

1 Corinthians 13- 1 Though I speak with the tongues of men and of angels, and have not charity, I am become as sounding brass, or a tinkling cymbal”

. God will deliver you, once you approach him baring your soul. As Adoni said to Jerimiah
Jeremiah 15:19 (CEB)

19 Therefore, the Lord proclaims:
If you return to me, I will take you back
and let you stand before me.
If you utter what is worthwhile,
not what is worthless,
you will be my spokesman.
They will turn to you,
not you to them!

0 thoughts on “ARE YOU BEING BLESSED BY THE PSALMS?”