AS I HAD ASKED LAST WEEK , KEVIN NEEDS HELP TO COMPLETE HIS HOUSE

When Kevin Robinson’s story was first published in the Jamaica Observer last year, thousands of people shared it by pledging to provide assistance, but few delivered on their promises.

Robinson, a 33-year-old disabled man, was only 16 years old when he was shot and left for dead while visiting co-workers and friends in Spanish Town.

Since, then Robinson — who owned his independence from he was aged 13 by selling snack items to help his grandmother who has cared for him since he was a baby — has been forced to stay home, without a steady income and has struggled to procure basic amenities.

Robinson’s housing situation, however, has not been the best, and of all the things he needed — including a wheel chair – which has since been provided by Food for the Poor — his greatest need is a place to call home. 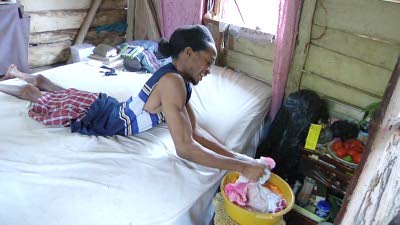 Thwarted by many issues, including an inability to source relevant documents for land, a good Samaritan taking special interest in Robinson’s dilemma has contributed $100,000 which has since been used to initiate business transactions with the owner of an unfinished one-room studio, opposite Robinson’s present location. “Some very good people have seen my story and they know my plea is genuine.
Some bloggers, for example, help me out sometimes, while others call or send me positive messages. It’s been 18 years that I have been on my back and there is not a day that goes by that I don’t wish I could depend on myself.

But even with the $100,000 donation, the contract that Robinson and his advocate Kenneth Burrell — who has, over the past years, seen to his care — have engaged in, leaves a balance of $200,000.

The house is still unfinished as the men need construction material such as sand, stone, cement, blocks, tiles, paint and amenities for the bathroom and kitchen.

They also require material for electrical work and other household items. Robinson said that even though he trusts God to bless him as he experiences this setback, he is still a little daunted.

“I trust God to work things out but it has been difficult for me. I have had many sleepless nights; sometimes I cry and I just want to be somewhere comfortable now,” Robinson told the Jamaica Observer. With the kitty now dry Robinson is, for a second time, pleading with Jamaica and the rest of the world to help him to find a place that will protect him from the elements of the weather.

“Many nights me cold. Sometimes I am wet, and it’s always dark and the dust all the time bother me, so I am sure you can see where I’m coming from when I say that I really need the help,” Robinson said.

But Robinson also has another major burden on his mind. “I am not a lazy man. I help myself with everything. I ok, wash my clothes, wash and comb my hair and spread up my bed … everything for myself I can do.

I also spend a lot of time working on my art. I enjoy writing and drawing. But more while I don’t have any material, but I love to do it. A computer and some drawing paper and paint — anything would help,” Robinson said.

He told the Sunday Observer that he has even made efforts to learn how to use several computer programmes, including some art-related, through his friend Tevin. He said that is why he needs a computer and printer — to develop on his skills, and he believes he could make a business from the pen as well as digital art.

“I truly love art … it is just to get the material. I see many disabled people getting the opportunity to learn skills and so on and can become employed. I don’t want to be left out of that. I want to experience the pride of knowing I do myself, and everybody who helped me and going to help me proud,” Robinson shared. Robinson, who has written a song about life, also intends to write a book, which he has already began to plan mentally.

However in the meantime, he says that he depends on his faith in Christ, his art and poems to keep him sane on his roller coaster ride.

Persons who wish to assist Kevin Robinson may call him at (876) 421- 1882 or you can make donations to the May Pen, Clarendon Jamaica National branch, account number 10163126. The account is in the name Kenneth Burrell.

2 thoughts on “AS I HAD ASKED LAST WEEK , KEVIN NEEDS HELP TO COMPLETE HIS HOUSE”