The Jamaica Public Service says it is continuing its fight to eliminate electricity theft.

The light and power company said it removed 310 illegal connections from residential premises in the Bay Shore Heights area in East Kingston last Thursday, even going as far as to dig illegal wires from out of hillsides.

“In addition to removing multiple ‘throw-ups’ from the overhead network, JPS crews were forced, in some instances, to dig illegal wires from out of the hillside, as these were buried underground and run to various locations.

“Wires were also run across the road, then covered over with concrete to conceal them,” JPS said in a news release on Sunday. 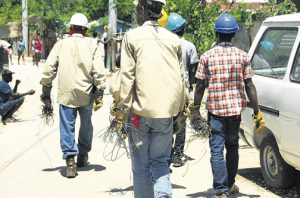 The company moved to remind people that illegal connections are not only against the law, but are also extremely dangerous, posing a threat to property and life.

JPS said the removal of throw-ups is but one aspect of the organisation’s thrust to eliminate electricity theft.

“Up to the end of September, teams had removed 117,381 illegal connections from the network, and audited 3,478 meters. Additionally, JPS has been increasing its focus on social intervention, over the last two years, in a bid to help alleviate some of the circumstances which have led to the theft of electricity. This has been taking place through its Community Renewal Programme, which has targeted vulnerable communities in the Corporate Area and St James,” JPS said.