BLAMED FOR HER HUSBANDS DEATH

Dear Taiwo,
Please, help me out of this situation as I really do not know why everyone, including my children are making a fuss about the situation on ground.
As for my in-laws, their case is understandable, as they wouldn’t want their family member to suffer eternal shame. This situation, however would have been avoided if they had not been partial and senseless about their brothers issue at the initial stage when I kept reporting him, but all they could say then was that I was a jealous woman who didn’t want their brother to enjoy his wealth and his life, because, to them, enjoying life starts and ends with going about town with different women, adultery, night crawling and drunkenness.
Babafemi, and I met in our final year in the university. We were in the same level, studying the same course, but we attended separate schools. It was our friend’s engagement party; I was the chief bride’s maid while Babafemi was the best man.
Our other friends jokingly match made us and that was how we started our relationship. All of them were happy for us when our relationship, eventually led us to the altar and we became husband and wife.
We both studied Economics and as God would have it, we secured jobs in the same bank, but not the same branch, even before we got married. We both had good jobs, so we began our marital life on a good financial footing. We had a wonderful marriage, and our children; three of them; two boys and a girl came without a hitch.
After 15 years of banking experience, Babafemi, decided he has had enough. He resigned and went into private business of importing and exporting. To make things easy, we both pulled resources together to start his business. To familiarise himself with his business, he had to stay in the United States of America for three years. It was during this time that he became a changed person.
When he came back and established his business, he became a chronic womaniser and night crawler. I tried all I could to make him change to no avail. I told his mother and cousin that I was close with, but their response surprised me. I was particularly shocked by my mother-in-law’s response when she told me like the typical Yoruba mother that she did not circumcise him because of me and she also reminded me of the fact that my father-in-law had many wives and being his first son, he could marry as many wives as possible.
That was how my husband married and moved in with another woman, leaving the children and I. It was painful, but with the grace of God, I survived. It was really painful because, he moved into our own house with her, leaving my children and I in a rented apartment. As if God wanted to compensate me, it was the era of the new generation banks. I secured a job with one of them which paid better than where I was, and this made my lot better. Babafemi, completely forgot my children and I, his family members did too. I had a good job and the support of my family members, so I was able to send my children to good schools, built my own houses, not even one and things were okay with us.
Once in a while, we used to meet at friends’ parties and other outings, he would ignore me, and I became used to it. In fact, I thought of filing for a divorce, but my family members and my children advised against it.
Several times, I see him with different women. Eventually, he married more than one wife after me. I made up my mind not to re-marry again, although, had a strong relationship with a widower which would have resulted into marriage, but for my resolve not to re-marry. He was of tremendous help to my children and me.
He was a lot older; he died six years ago. At a point, Babafemi, wanted to raise the issue about my relationship with him, I didn’t even have to say anything as people who knew us took up the matter on my behalf. 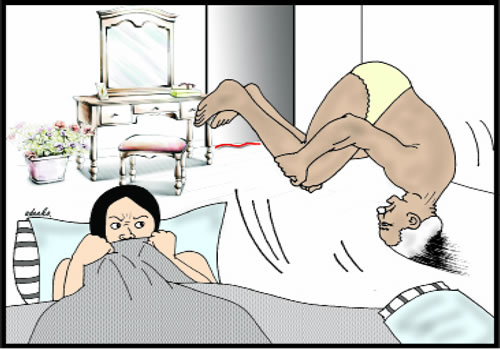