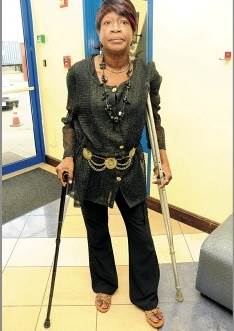 A legally blind woman who has been featured in the Jamaica Observer in recent years, has complained that she was raped in brutal fashion a week ago, adding to the countless other challenges that she faces.
Paula Gayle, who lives in Mount Moriah, St Ann, revealed to the Sunday Observer that one of three men who broke into the house that she occupies raped her last Sunday, while two others ransacked the premises in search of undetermined items.
St Ann police yesterday confirmed that she had filed a report that she was raped and the matter was being investigated by the Centre for the Investigation of Sexual Offences and Child Abuse (CISOCA), officials from which took her to see a doctor last week.
Gayle has been embroiled in a court battle to have avoid being evicted from a St Ann house that she has occupied for over 20 years. The property’s owner has returned from living overseas and wants to reclaim it, a recent court hearing was told.
She has long chronicled several tales of woe and pointed a finger at members of the Jamaica Constabulary Force whom she said were working in collusion with criminals to fleece her of her belongings and keep her mouth shut after she had filed a report in 2007 about illegal activities that involved a policeman. She reported to police that she was first raped on July 21, 2008.
In the latest incident, Gayle said that, had she not decided to play dead, she believes that her attackers would have finished the job of strangling her, which one started after she was raped.
Despite the Sunday Observer highlighting her complaints over the past year, the Police High Command has failed to look into the matter, forcing her to take her issues to human rights organisation Jamaicans For Justice (JFJ), and other individuals and groups who are willing to listen.
On a visit to the Jamaica Observer on Friday, Gayle, who gave the newspaper permission to use her photograph with this story, maintained that the situation she faces stemmed from her reporting the “illegal activities” in the Mount Moriah area. The police, she said, instead of turning the spotlight on lawbreakers and moving to correct the irregular activities, have decided to go after her for blowing the whistle.
She told the Sunday Observer that she visited the office of the commissioner of police with a view to seeing Police Commissioner Dr Carl Williams, but was told that she had to submit a request in writing. This, she did, with the assistance of JFJ, but before leaving the premises she asked for “a receipt” to show that she had visited.
She said that the “receipt” was necessary, as she had gone to the commissioner’s office on four previous occasions, but personnel there said that they had no knowledge of her visiting.
Gayle, 49, said that the men broke into the house early Sunday morning.
She had broken her leg earlier this year, which has yet to be pinned, so it is now swollen.
Despite her physical handicap, added to the challenges that she faces with her vision, there has been no respite from criminals, she told the Sunday Observer.
“Mi see death,” Gayle said of her ordeal a week ago.
She said she heard someone digging outside but did not know what was to come.
She said she that after going to the bathroom and heading back to her bedroom she sensed the presence of persons in her house, as based on the rapid deterioration of her eyes, she could see only “shadows”.
She said that she was attacked by one of the men, while another searched the place and the third merely followed instructions from one of them to do whatever he ordered.
She said that one of the men held her by the throat and immediately she felt that her life was in danger.
After struggling with her attacker, she felt weak and decided to pretend that she was dead.
“Mi feel weak and mi seh mek mi pretend like mi dead,” she said.
But she sprang to ‘life’ again after the men appeared not to be in a hurry to leave, the distraught woman said.
Things then worsened when one of the men decided to rape her. She said that she knew the man who forced himself upon her sexually, and suggested that he was mentioned to police regarding a previous incident which involved her while she had her sight.
“It’s the ‘terribleest’ feeling,” she said of the latest ordeal. “I am living in misery. Right now I am tired and hungry. I need to do surgery on my leg on the fifth of January next year and I don’t have the first dollar of the $15,000 that I need to buy the pin,” Gayle said.
Gayle, who is now before the courts facing a possible eviction order, said things continue to go downhill for her.
Following the recent attack on her; she said she wants to leave the house but has nowhere to go.
The matter was mentioned in court recently.