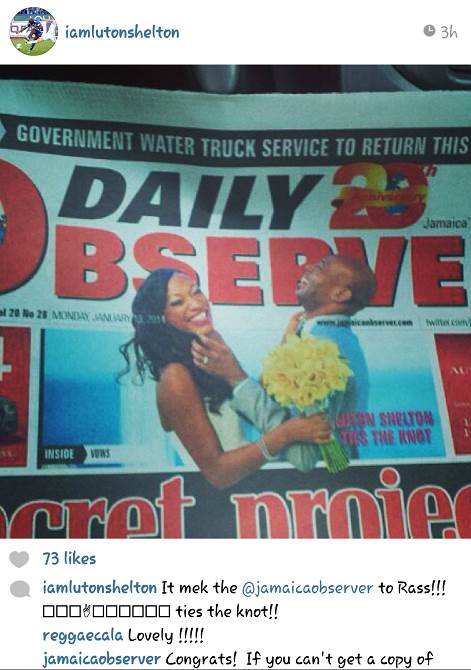 “Love begins in a moment, grows over time, and lasts for eternity.” — Unknown

Tne evening in 2005, in the heart of Kingston — at the National Stadium, during the annual Gibson Relays to be exact — the stars aligned for Luton Shelton and Bobbette Phillips. Around them, members of a noisy and constantly shifting crowd were screaming in support of their favourite athletes, vendors traversed the stands selling their wares, and in the midst of the chaos, a young Shelton eyed the lovely Phillips.

“He sent his sister Luriesha over to me with a piece of paper with his name and telephone number written on it. When I saw the name ‘Luton’, both myself and my best friend Toshauna Cowan burst out laughing, asking ‘What kind of old man’s name is this?'” Phillips told Vows.

‘Shy guy’ Shelton — the now in-demand FC Volga (Russian League) footballer — was, however, undeterred. He persisted in getting her attention; she motioned for him to come over, and so began their love story. Phillips confesses that while she may have been playing hard to get, the attraction was nevertheless immediate, and what began as a friendship soon blossomed into a passionate romance.

In 2008, while Phillips was pregnant with their daughter Lutasha, Shelton decided it was time to make it official.

“He was attending a football camp for the Reggae Boyz and I had gone to visit him. We were sitting in the car in the parking lot of the Alhambra Inn; he was in the passenger’s seat. I noticed that there was something very different about him; he was acting very nervous. He began to speak about not being able to live without me and expressed in no uncertain terms how much he loved me. He asked me to marry him, and right then and there I said ‘Yes!'” Phillips gushed.

Fast-forward to picturesque Portland, December 14, 2013. The Reverend Dr Peter Garth is in position at the gorgeous Trident Hotel, while wedding coordinator Stephanie Taylor is putting the finishing touches on what will be the ceremony of the couple’s dreams. The groom is dapper in a Carlton Brown tux and ready for action, the bride — a stunner in a Sophia Tolli mermaid gown — has butterflies in her stomach as she contemplates the moments ahead. There’s little her bridesmaids can do to calm her jitters; for her, there is but one cure; the look of love in the eyes of her husband-to-be.

“When my song [Jennifer Hudson’s Giving Myself] began to play and Stephanie gave me the signal to start walking up the aisle I just focused on Luton and the lyrics. I imagined saying those very words to him only; I saw no one else. Everything came together beautifully, just as planned,” she recalled.

There was much applause when the newly-weds stepped out on the dance floor during the reception — which took place at Trident Castle — grooving to John Legend’s All of Me for their first dance as husband and wife. The celebration saw guests dancing into the wee hours to pulsating beats spun by DJ Bambino.