Wait is over as Bolt bows into action
Sprint star begins quest for immortality today; eight other Jamaicans down to compete

BOLT… will lead eight other Jamaicans into action on what is expected to be a busy day on the track.

RIO DE HANEIRO, Brazil — The quest for immortality begins today when Jamaica’s Usain Bolt bows into action as he hunts an unprecedented three consecutive 100m titles in what will be his last Olympic Games.

Bolt will lead eight other Jamaicans into action on what is expected to be a busy day on the track. He will be joined by countrymen Yohan Blake and Nickel Ashmeade in the 100m.

The men’s preliminaries will take place at 7:30 am before Bolt and company join the action later in the day at 10.00 am Jamaica time.

As usual, the blue ribbon event of the Olympic Games determines the fastest man on the planet. All eyes will be on world record holder Bolt who hunts a historic triple treble of gold medals in the 100m, 200m and the 4×100 relay. 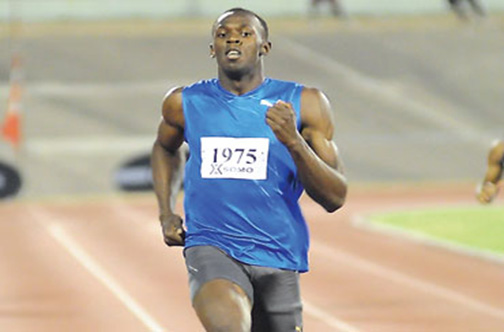 He has promised fireworks in this his reported last Olympic Games and the entire world awaits with bated breath as American Justin Gatlin and Yohan Blake are tipped to seriously challenge for his crown.

Uncertainty still surrounds the form of Bolt despite his 9.88 clocking after stumbling out of the blocks, but only a brave man would bet against Bolt securing his third consecutive 100m title.

Jamaica’s two women triple jumpers, Kimberly Williams and Shaneika Thomas, will be the first two in action at 7:40 am. Thomas will be in Group A which consists of 18 jumpers and Williams is drawn in Group B which has 19 competitors. The qualifying mark is 14.30m, or at least, the 12 best performers advance the final.

Aisha Praught is drawn in heat three of the women’s 3,000 steeplechase set for 10.05 am as she tries to make her mark in the Jamaican colours, after switching allegiance last year.

Having been disqualified on her debut for Jamaica at the 2015 World Championships in Beijing, Praught will be hoping to make amends with a good showing. She has a seasonal best of 9:31.75 minutes, but will have to run closer to or, achieve her personal best of 9:00.67 minutes to advance to the final. Eighteen people will be in her heat. The first three from the two heats and the next six fastest go through to the final.

Then comes the women’s quarter milers in Shericka Jackson, Stephenie-Ann McPherson and Christine Day, who will take to the track at 9:14 am. McPherson, the Jamaican champion, will be in heat one of the women’s 400m where she will face Patience Okon George of Nigeria.