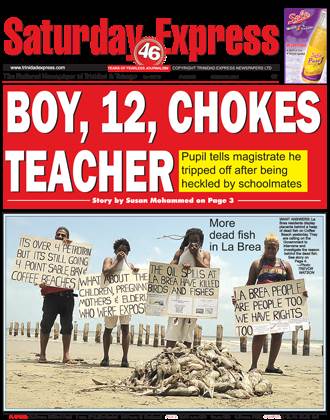 BOY, 12, CHOKES TEACHER
Pupil tells magistrate he tripped off after being heckled by schoolmates

By Susan Mohammed [email protected]
Story Created: Mar 21, 2014 at 9:46 PM ECT
Story Updated: Mar 21, 2014 at 10:52 PM ECT
A 12-YEAR-OLD pupil of Jordan Hill Presbyterian Primary School yesterday pleaded guilty to slapping and choking a teacher and is to be sentenced on April 11.
The boy pleaded guilty to the charge before Princes Town Second Court Magistrate Avason Quinlan.
When asked by Quinlan about the incident, the schoolboy said he “tripped off” because other pupils had provoked him about his mother, who died three years ago.
Police prosecutor Sgt Mohammed read the facts that the 32-year-old female teacher had observed the schoolboy during recess throwing bottles at other pupils, and she spoke to him about his behaviour.
Around 2 p.m., the teacher again approached the child to scold him, and that was when he slapped her several times and choked her. Both of them fell to the ground, and the teacher broke free.
A report was made to Princes Town Police Station and the teacher was taken for medical treatment. A medical report submitted to the court stated she had suffered bruises and swellings. Acting Sgt Rampersad laid the charge.
The schoolboy’s older sister, who is an adult, appeared with him. An attorney from the Legal Aid Authority represented him.
Quinlan instructed that the boy visit a probation officer and ordered a report be submitted to the court.
She placed the schoolboy on $5,000 bail with his sister as a surety, and postponed the case to April 11 for a decision.
Meanwhile, a six-year-old pupil of Curepe Presbyterian Primary School, who allegedly slapped a teacher during a class session on Thursday, is to receive counselling.
The Express was told officials of the Student Support Services Division of the Ministry of Education visited the school yesterday and offered counselling to the child and his parents. The teacher who was allegedly slapped was also at school.
On Thursday during a class session, the First Year pupil allegedly slapped the teacher after she enquired about scratches and scribbles seen in a book.
Trinidad and Tobago Unified Teachers Association second vice-president Lynsley Dood­hai has expressed alarm at the level of school violence, especially in primary schools. He said he expects to visit the school on Monday.