The fight early Saturday inside the Bedford Technology store on Bedford Avenue near Church Avenue ended in the girlfriend’ s apparent strangulation — and was caught in all its savagery on store surveillance video, sources told The Post.

A co-worker found Deneisha Smith, 27, of Flatbush, dead inside the store and alerted cops, who ID’d the boyfriend using the chilling footage, sources said. 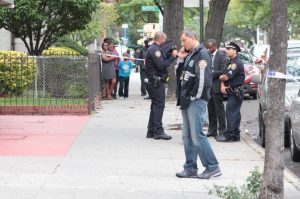 “It’s a vicious attack lasting over ten minutes,” one source told The Post. “And the woman fought for her life,” at one point cutting her attacker in the neck with a piece of broken glass.

When cops knocked on the boyfriend’s door a few blocks away, he was home — with his wife and four kids, one source said.

The boyfriend, who police did not immediately identify, tried to cut himself in the chest as cops moved to arrest him — possibly to cover up for his earlier injury.