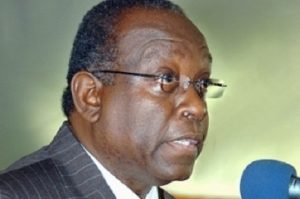 ELLINGTON RETIREMENT UPDATE: Bunting says he has good working relationship with Ellington
KINGSTON, Jamaica – National Security Minister Peter Bunting in his first public comment since news broke earlier this afternoon that Commissioner of Police, Owen Ellington had tendered a letter of retirement said he appreciates the extraordinary contribution made by Ellington during his 34 years of service to the Jamaica Constabulary Force. Bunting also praised the good working relationship he developed with the Commissioner since he took office in January of 2011.
Bunting who reposed strong confidence in the leadership of Ellington earlier this year said he was not in the business of speculating if there were other reasons than those stated in Ellington’s retirement letter.
“Commissioner Ellington is retiring on his own terms and on his own timing from the force. He (Ellington) has always said that he would retire at the right time for him and based on the fact that he has handed in his letter of retirement it must be the right time for him,” Bunting said in a radio interview.
Police officers are allowed to retire at age 60 or after serving for 30 years. There is also a provision for policemen and women to retire at age 50 even if they have not served for 30 years. Commissioner Ellington is 51 and has served the Constabulary for 34 years starting as a police cadet at age 17.
KINGSTON, Jamaica – Opposition spokesman on National Security, Derrick Smith says he is shocked and disappointed with the reported sudden retirement of Commissioner of Police, Owen Ellington.
Speaking to OBSERVER ONLINE Smith said news of the retirement of Commissioner Ellington comes as a complete shock to him and the Jamaica Labour Party.
“This is very surprising for us and personally it is very difficult to accept the reason of disengaging himself from the force due to the upcoming Commission of Inquiry in the 2010 operation in Tivoli Gardens as the major reason for Ellington to retire.”
Smith said that he met with Commissioner Ellington only last week and they had extensive discussions on crime.
“At that time when I spoke with him he was very upbeat, listing the plans and new initiatives the police would be employing to combat crime. That is why I am finding it so difficult to accept his main reason for retiring.”
The Opposition spokesman said Ellington was an exemplary policeman who served the force and the country with distinction for over three decades.
“I have found him to be an excellent person who always has the country’s interest at heart,” Smith concluded.