BUSTA CLUCK LIKE DUCK NOT RHYMING AN WILL NEVER 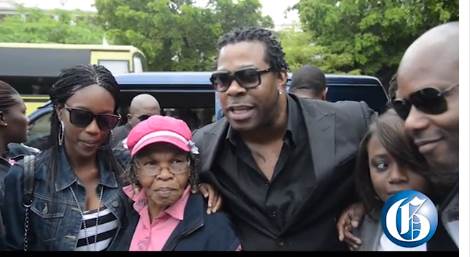 Busta Rhymes arrived in Jamaica last week, scouting support for the now incarcerated Vybz Kartel. Sources say that Busta was not only scouting support but is allegedly of the belief that he signed Vybz Kartel. It is being said that the American based artiste sent a total of $50,000.00 USD to help with Kartel’s legal fees. His first deposit was $30,000.00 USD followed by $20,000.00 USD on a different occasion. The Rapper was said to be confident of Kartel’s acquittal and had began making rounds for the artiste’s comeback.Inside sources say that Busta Rhymes may think he has a signed contract from Kartel however it may have not been signed by him.
Allegations are that the contract may have been signed by one of Kartel’s cronies with his permission and if released , the artiste had no plans on keeping his side of the bargain. The money that Busta Rhymes had provided had covered full court costs for Kartel and his very ”close friend” Mad Suss. Attorneys for the other defendants have allegedly not been paid in full and some may have received as little as $2500.00 USD , while Kartel’s attorney was the recipient of the money’s bulk.

Behind the scene sources in the Jamaican music industry say that Kartel’s conviction comes as a relief to many who feared his wrath if he was released. Many feared that Kartel did not learn his lesson and would probably inflict harm on many others. The source cited the lack of verbatim from the family of Lizard and went on to say that allegations are that the family was in fear and that was the main reason for them not speaking to the media. The source explained that allegedly the family was in so much fear that no close relative had offered a sample for the DNA and that the uncle was not Lizard’s real uncle.

Serious allegations are being made that juror #3 had been paid off and was expected to bring the other jurors on board. One member of the jury was said to have gotten worried and informed the law that based on the evidence provided, she would not be able to find the defendants not guilty but feared for her life. She was allowed to remove herself from the trial. When asked about Kartel’s partner Shawty sources said that it was highly likely that she was on vacation and they were of the believe that she was relieved…Allegedly..