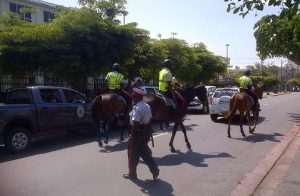 KINGSTON, Jamaica — Contrary to two Thursdays ago when jurors returned with a guilty verdict for Adidja Vybz Kartel Palmer and three co-accused in the murder trial for the killing of Clive ‘Lizard’ Williams, crowd support downtown Kingston today is sparse.

Members of the security forces are at this time keeping a strong presence close to Supreme Court as the few supporters on hand patiently wait to hear the sentence handed down by Justice Lennox Campbell.

“The case never try good, the youth was treated unfairly,” Dwight Campbell told OBSERVER ONLINE as he stood with small group of supporters gathered at the intersection of King and Barry streets close to the court.

“Is because he is from the inner-city why them treat him so,” a woman loudly added.

However, amid the group of supporters there were some who shared a different view.

“Right now him fi get more than 20 years, who is this Vybz Kartel, him is just a man,” another woman said quietly.

She was supported by a man who said he that he was anxious for the sentencing to be passed and over with.

“A just need the authorities to hand down the sentencing so that these security barriers can be removed,” he said