Officers were dispatched to the area of East Sixth Street and South San Pedro Street (map) about 11:36 a.m. after a report of an altercation between two people, said Officer Jack Richter, spokesman for the Los Angeles Police Department. 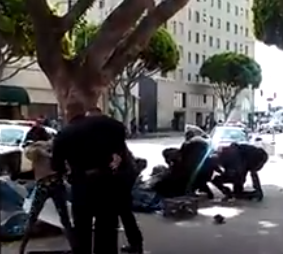 After the officers arrived a struggle ensued, during which police tazed a man, the LAPD said. The man was then shot by police, the department said. He was pronounced dead at the scene.

0 thoughts on “CAUGHT IN THE ACT? LAPD SHOOT HOMELESS MAN”