The heavily grilled wholesale area, a heightened sense of surveillance security, shouts of orders across a room mixed with the occasional Asian speech, and the continuous clicking of cash registers are now all familiar to Jamaicans as the ‘Asian invasion’ gains momentum.

Usually found in Kingston and St Andrew, Asian-operated businesses have, over the years, spread to the rural areas of the island. Globalisation being a key factor, Asian businesses have become the norm throughout towns in modern Jamaica.

In the town of Linstead, St Catherine, a community which usually had a handful of Asian-operated businesses, there are now over 20 establishments all offering a range of goods at cheaper rates to the community. 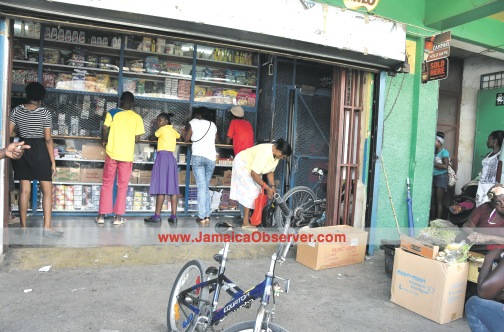 “Everyday you look you see a new one open,” one community member said, speaking of the businesses.

Despite their invasion, they have not assimilated well into the community.

As the Jamaica Observer visited the community, scores of Chinese employers suspiciously peered from their poorly lit establishments through the grilles, anticipating their daily customers.

When approached, most Asian representatives shied away from speaking with the media, citing their discomfort with the English language as the reason.

“No, I can’t speak to you,” one businessman at the Han Lue Brothers Wholesale and Supermarket pleasantly told the Sunday

Observer as he directed the reporter to speak with a senior staff member.

“I don’t want to get mix up. I don’t really know the English,” he said with an unusual accent.

At the Homely Wholesale and Supermarket, the Asian operator when approached said “Mi nuh understand” once he recognised the media, yet continued to interact with other customers who enquired about products.

Other entrepreneurs are only able to communicate with and understand patois.

A woman only identified as Tina, who operates a wholesale on Market Street, said that money attracted her to the community.

“Mi ave pickney go school, mi nuh beg money. People have han an foot must work, God say so,” Tina, who has been working in the community for a decade, said in her accent.

“When me pickney leave school me need fi enjoy res a my life. Worship di church,” she continued in her broken creole.

But some businessmen have transitioned, from the traditional wholesale facilities. A handful of recently established Chinese-operated supermarkets were observed where, unlike the usual shouts of orders in wholesales, customers freely walked through the aisles of the establishment and hand-picked their items of choice.

“Me rather you can walk in an pick weh you want, ‘cause sometimes dem give you meat an it may be spoil, so it better if you can pick it,” Novelette Graham said of the diversified businesses.

“Dat better off ‘cause you can walk in an tek up weh yuh want dan yuh stan up di whole time a call an a ask fi serve. Mi nuh like da one dere, oh gosh da one dere very hard fi tan up an a bawl out serve dis an dat. Who don’t have big mout fi holla out mi sorry fi dem,” Graham continued as she shopped in a newly opened supermarket.

A supervisor at the Jus Mart Supermarket on Market Street, who identified himself as Sherwin Williams, told the

Sunday Observer that the new structure is in tandem “with the way the world is going”.

When asked what caused his employer to deviate from the norm, Williams said: “Just a change from the traditional to a more modern, relevant and convenient business”.

He said the three-year-old business was opened because the entrepreneur was propositioned about the business and thought it a good investment.

Despite the deviation from the norm, however, the Asians still have an elevated area where the owner supervises workers, customers and happenings in the establishment from surveillance footages.

His establishment, according to senior staff member Christopher Williams, was one of the first Chinese-operated businesses in Linstead and has served the community for almost two decades.

Williams said that since this time, the business has grown tremendously.

“Most of the other (Chinese businesses in the area) depend on us for their supplies,” he stated.

The business, he said, was relocated from Kingston in the early days.

“Well, maybe he was encouraged based on the geographic location. He was in Kingston at Heywood Street and it was competitive there. At the time, Linstead only had about one wholesale and coming into Linstead then opened up doors, as everybody from Clarendon, St Ann, St Mary, Trelawny even people from St Elizabeth come to Linstead to shop,” Williams reasoned when asked what attracted the entrepreneur to the community.

“Linstead is basically the business capital for St Catherine now,” he added.

In tandem with the shift, the Sunday Observer also noticed an Asian-operated clothing store along King Street.

The manager, though reluctant, jokingly told the Sunday Observer that he was attracted to the community because “me nuh have no money. Me cya go Kingston”, suggesting that it would be more difficult to establish the business elsewhere.

He noted that the store was less than a year old and declined to comment on its profitability.

“Linstead has outgrown its capacity now because [there are] traffic problems; too many businesses, everybody competing for the same little dollar,” Williams from Han Lue Brothers said of the community.

The community has had mixed reactions to the invasion. Graham, who frequents the Chinese stores, told the

Sunday Observer that she has no qualms with the businessmen.

“Dem service no that bad an dem cheaper than most of the other places,” said Graham. “Me will go inna dem store but it all depends pan what I’m going for, ‘cause some a dem sumn no strong but other dan dat, it alright.”

One vendor, Shawn Wright, who peddles goods along Market Street, said he doesn’t mind the increase in Asian businesses, as they assist to alleviate crime in the community.

“Without di Chiney dem we have more gunman. Even if dem ago pay $100 a day, me feel betta wid dem around,” Wright said, reasoning that they brought employment to the community. “See di likkle yute dem in deh weh a push di rice an di flour a get dem likkle $2000 odd a week? Dem ago tink fi rob me if dem lef.”

Though his friend Jevaunie Watson agrees, he believes that the Chinese should pay employees better.

Watson also suggested that the Government intervenes in this regard.

“Dem a pay too cheap yes, but it betta dan nutten. You ago find 50 man a tief now, see when dem gone, you ago find nuff more a dem an gunman inna di town,” Wright chimed in.

Other vendors, however, believe that the entrepreneurs should return to their homeland.

“Dem fi go back a dem country,” another vendor who identified herself as Miss Pam boldly said as she sold her produce outside a Chinese-run wholesale along Market Street. She made certain allegations about the Asians which cannot be mentioned on these pages, as the Sunday Observer does not have evidence to support the claims.

With the increase in businesses, there is now an even more competitive market.

“Based on value and the fact that we have adjustable prices- sometimes one per cent or two per cent markup people more attracted to us,” the senior staff member at Han Lue Brothers reasoned.

“So a man will burn extra gas or walk farther to come and save. So when him buy $200,000 worth of stuff what him save compensate back fi him gas and time,” he added.

The few local businesses in the community have felt the pinch.

Salesperson at a haberdashery on King Street told the Sunday Observer that the cheapness of goods offered in Chinese establishments is a deterrent to their potential customers.

“A lot of times people will come in and look at the price for something and them will leave and say them going to walk and come back. Little after, they pass with the product and tell you they got it cheaper up the road in the wholesale,” the woman, who requested anonymity, said.

“It must have an effect enuh ‘cause when dem can ship in all a container a tings, you know they shop together and in bulk, so when we a carry in smaller amounts it have a effect man. So when we will sell something for $480, dem can sell it for all $420,” she continued.

Chinese and Indian merchants and traders are the dominant ones among the fast-growing Asian population in Jamaica, dwarfing citizens of the Philippines, Japan, and others.

There is limited information regarding how many of them have received naturalised citizenship, or even work permits to operate businesses here.

That information could not be readily obtained as the Sunday Observer went to press.

6 thoughts on “CHINESE BUSINESSES IN JAMAICA”