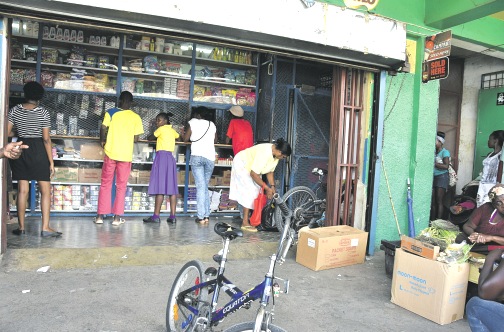 They are often referred to as ‘Chiney man’ throughout Jamaica, but according to one Chinese-Jamaican, the phrase is offensive to his people.

Having lived in Jamaica for over two decades, the St Elizabeth businessman who spoke on condition of anonymity believes Jamaicans are racist toward Chinese.

“When you go outside how much people say ‘hi Chinese people? No ‘Chiney man’ is what they call it? That’s a modest thing to you?” he questioned.

“When you go to America and they say, ‘you black person’, what are you going to say? or ‘black people go back to your country!’ How are you going to feel? You won’t feel good; it’s the same thing, you’ll find it offensive,” he continued.

He noted that Jamaicans’ attitude toward his people is unwarranted and sought to dispel false notions that Jamaicans tend to perpetuate about them.

“You see in Jamaica, you have more than 80 per cent of the people will say ‘Chiney man come in this country to make money and go weh; they don’t wanna spend money and help develop Jamaica’… but Chinese help out Jamaicans here by bringing the cheap stuff that people can get to live in here. Because if all the Chinese run away you would totally find out — the cost would be really, really high.”

He argued that this belief may be as a result of the country’s history when the Chinese were brought into Jamaica as indentured labourers to work on sugar estates after the emancipation of the slaves. Their dislike for the job, however, led them to find other means of employment by developing businesses.

Conceding that in every country non-natives will experience some level of distrust from the natives, the entrepreneur said he could not understand the extent of it from Jamaicans.

“You people (Jamaicans) is something different. You say ‘Chiney man do this an’ do that’. If you really hate Chinese you can do whatever you want, of course, because nobody can limit you; but the point is what Chinese do bad to Jamaicans?” asked the entrepreneur.

“From how me see from the time me come out here, you see more Chinese people invest in here, even their business, even their property, even their house, even the development and even the employment to help Jamaicans. I don’t see any other nation’s people help like how Chinese people help here. White people come in here and what they do? They do a big factory, they get their big money and they go away, but you guys love white people; nobody complains.

“You guys only observe some things because you see Chinese people driving a good car, living in a good house, and you look on that. Chinese people nuh rob you, you know. They not really get so much money and go away, you know. They contribute to development because if they have ability, they expand and then they employ more Jamaican people in here. Of course some people will employ some Chinese because like one or two people can manage a big shop. And another thing is some of the Jamaicans is not really good either. No matter where they go, they try to thief and they rob we,” he told the Jamaica Observer.

“If your country was observing how Chinese do, look at the contribution to the country — so much. Of course I won’t say everybody is good, you understand. Nobody can say their nation is very good, but you must have some good and some bad, even the Jamaican, Chinese, American, any country, but the point is you don’t observe it. We not really make up any criminal in here, we not really thief the Jamaicans in here, we not really make up trouble in here; [considering] what we do for your island, then why are there so much Jamaican people hate Chinese? I don’t know,” added the merchant.

He highlighted the stark difference in reaction that Caucasians would get from Jamaicans as opposed to his kind.

“What we get back or what Jamaicans return to us is that most of the people don’t like the Chinese because the Chinese ‘mean’. But put it another way, how much white people do for you,” he stated. “Because you only see the tourists them and they give you some tip and they say ‘oh, white man is so gentle’, and therefore you get something. But when you look on the long term, how much the people coming here and like Chinese staying here with you together to build up your country?”

He said the Chinese have helped to develop the country’s labour market, creating employment for numerous Jamaicans as their enterprises expand.

He addressed the notion that Chinese only help their own.

“But you guys just like to say Chinese help Chinese and not help Jamaica… even though we employ Jamaicans. We do good for Jamaicans, but turn around is what we get back; people thief you, come carry in other people for them to rob you, so why you going to help? Chinese and Chinese develop trust; we first pay to trust other people, but the trust people turn back to us can’t be trusted, so what you going to do? You going to continue keep the trust?” he questioned.

“We call it tradition in Chinese,” said the entrepreneur, “Chinese help Chinese, yes, but Jamaicans can help Jamaicans same way too; nobody limits you,” he aso stated.