CHRIS BROWN DOE HAVE NO SHAME 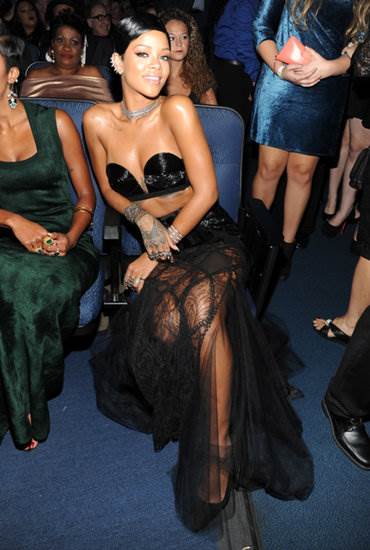 Calm down Chris, this is getting embarrassing.
It seems as though Chris Brown has been trying desperately to get ex-girlfriend Rihanna’s attention, and she is having none of it!
Following his break-up from wannabe model Karrueche Tran, Chris Brown seems to have his heart set on winning back Bajan beauty Ri-Ri, who he has had a very on-again, off-again relationship with since they broke up in 2009 after he assaulted her.
Apparently the rapper attempted to sneak into the second Californian date of Rihanna and Eminem’s Monster tour but he was spotted by fans and this stealthy picture quickly appeared on Twitter:
Okay, so it is hardly the most HQ of photos but what you are looking at here, ladies and gentlemen, is Chris Brown and Rihanna in EXTREMELY CLOSE PROXIMITY and word on the grapevine is that Rihanna didn’t even acknowledge him, with a sneaky source revealing:
“Chris came backstage and he was very loud because he obviously wanted to be noticed, but Rihanna didn’t even looked at him, she was just about her business performing with Eminem for their fans and taking photos with fans.”
SHAME!
Chris, we hate to break it to you, but move on – she’s just not that into you.

0 thoughts on “CHRIS BROWN DOE HAVE NO SHAME”