THE OUCH CREW ..THIS IS WHAT THEY TOLD THE STAR TWO YEARS AGO
CURTIS CAMPBELL, STAR Writer
Veteran dancehall designers, Ouch Crew, are currently in Jamaica documenting their contribution to the industry’s fashion to be displayed in a dancehall Manhattan museum.
The veteran designers now believe that the dancehall culture is dormant.
Founder of ‘Ouch’, Barbara ‘Mama Ouch’ Francis, migrated with the brand in the late 90s. According to her, dancehall fashion is not the same.
“Right now there is no dancehall fashion culture. What I see now is women coming into the dance and looking two sides. There is no music that depicts the culture, so now when you go to dance you are bored because the music is not right. Even at the Olympics dancehall was not represented, that goes to show that there is no message and no trend, so when females go to dance now it’s just to look a man,” Mama Ouch said.
Her daughter and co-designer, Paula Ouch, also commented that she believes dancehall needs mentors.
“Somebody needs to go to the dancehall and do something that people can emulate positively and strive to be like it,” she said.
The Ouch brand was extremely popular in the 90s, as they were worn by entertainers such as Lady Saw and Macka Diamond. Their fashion was also featured in dancehall film Dancehall Queen and American hip hop film Belly, featuring rapper Nas and DMX.
Dancehall fashion
After over a decade of popularity in the dancehall fashion industry, the Ouch family migrated to the United States citing that violence was bad for business.
“We were doing well, we were even featured on Caribana Fest in the United Kingdom. They paid for us to promote dancehall fashion over there. But I left Jamaica because of violence. When we were at a clash with Shabba Ranks they stole our car and crashed it. I started to feel intimidated and extortion was also coming into play at the time,” she said.
Mama Ouch said she still designs dancehall fashion and also revealed that her daughter took the opportunity to attend an international fashion school to increase their level of professionalism. She also gave pointers for upcoming local designers.
“There has to be designers with brands of clothes that covers up the body and depicts dancehall in a way that attracts the outside world. Dancehall needs excitement. Everybody wants to follow America, we need to be more creative, they are too Americanised and going for name brands,” Mama Ouch continued.
“We are very happy about our inclusion in the dancehall museum, and I don’t think they could have done it without us. The person in charge of the programme says he does not know about anybody else,” she concluded.
THIS IS WHAT THEY LOOKED LIKE….KEEP IN MIND DI BALD HEAD ONE MI MENTION LASTNIGHT………ANYONE WITH MORE PICS OF THEM FROM BACK IN THE DAY SEND DEM COME 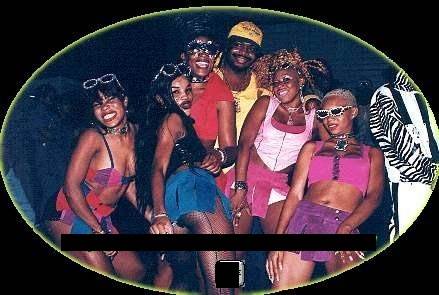