DEA HUNTED FOR SUSPECT FOR 2 YEARS 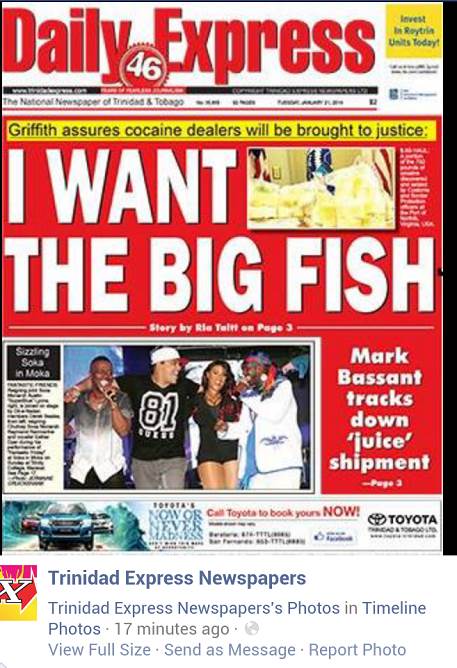 COCAINE shipments sent by drug smugglers using the guise of the defunct company Carib­bean Sea Works Ltd over the last year and a half from Trinidad were closely monitored by Drug Enforcement Administration (DEA) agents.

“The DEA through controlled shipments were able to track a consignee in the United States and this sent up red flags, and they are aware who is involved in the US. They have since back-tracked here to obtain documents and go through cold data records,” revealed a senior intelligence source who is actively involved in helping the DEA gather information in a $644 million drug bust in Norfolk, Virginia, USA.

The shipment in question originated in Trinidad.

Also being targeted are the local cohorts in the lucrative trade.

The senior intelligence source said, “It was not the first hit and, based on the DEA’s intelligence, these containers would have also contained cocaine, but it was all in an effort to draw out the US-based link.”

Yesterday TV6 and the Express reported exclusively this company had been defunct and was never involved in the business of shipping but, rather, construction, as confirmed by relatives of John O’Sullivan, the former director who died about three years ago.

With reference to using Caribbean Sea Works Ltd—which has been a defunct company for more than three years, with both telephone numbers out of service—the source said, “This is their way of shadowing—using a company that might not be in existence anymore, but the company may still be registered.”

The source said intelligence gathered by the DEA points to a meeting that might have taken place in Tobago close to two years ago, which triggered this multi-million dollar clandestine operation.

“What we were told was that a South American drug lord, masking as a Venezuelan, who we believe is actually a Colombian, met with a local businessman, who gave him the assurance they can move the product through here.”

The drug smugglers plotted how to move millions of dollars in cocaine from Colombia to this country and then to the United States.

This mutual meeting, law enforcement sources say, soon turned into a lucrative trade, with the businessman promising to ensure the cocaine left here undetected. But what they did not realise was that from early on, the DEA was on to them.

Yesterday afternoon DEA agents, along with members of the Strategic Services Agency (SSA) and other high-ranking law enforcement officials, met from close to 2.30 p.m. for almost two hours to strategise the way forward in dealing with this drug bust.

Sources in the US, when contacted, also indicated Homeland Security has now taken active charge of the investigation and is working closely with the DEA.

Following the high-powered meeting at the SSA building at St Vincent Street, Port of Spain, senior intelligence sources informed the Express and TV6 News about some of the plans discussed to tackle this investigation.

“They are planning to pursue the North American link. It is big, and a lot of what they will be doing is high level. We have been told that this cocaine shipment eventually destined for New York is being distributed by several organised crime gangs within that area,” the source said.

The source revealed plans were afoot by the DEA, both local and foreign agents, to move in on the local person fingered in the operation.

Sources say the main man is originally from Central Trinidad.

“We have been told this man heads a local organised crime group that sanitises their money in underground canals and is very connected.”

The Express and TV6 News understand DEA officials may ask the local man involved “to flip” and turn informant and provide them with key information to assist in their far-reaching drug operation, with the intent to arrest key pla­yers.

This is not the first time mega loads of cocaine have been exported with the use of export products and the use of the exportation systems.

In fact, in 1995, DEA officers cracked open a massive operation in this country when cocaine was found in fish being exported, and two Trinidadian men were extradited to the US, where they were convicted for cocaine trafficking