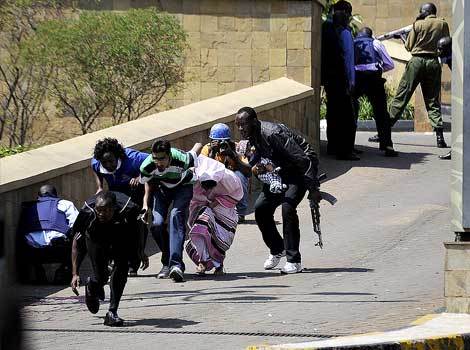 Kenyan troops were locked in a fierce gunfight with Somali militants inside an upmarket Nairobi shopping mall on Sunday, in a final push to end a siege that has left 59 killed and 200 wounded with an unknown number of hostages still being held. Israeli forces joined Kenyan efforts to end
related stories

a deadly siege by Somali militants at the mall, a security source told AFP.

“The Israelis have just entered and they are rescuing the hostages and the injured,” the source said on condition he not be named.

The intervention came 26 hours after gunmen walked into the complex, tossing grenades and spraying gunfire at shoppers and staff.

Some 10 to 15 gunmen are still battling security forces inside Nairobi’s Westgate shopping mall, he said.

“A number of attackers are still in the building, and range between ten to fifteen gunmen,” he said.

“We believe there are some innocent people in the building, that is why the operation is delicate.”

Somalia’s Al Qaeda-inspired Shebab rebels said the carnage at the part Israeli-owned complex mall was in retaliation for Kenya’s military intervention in Somalia, where African Union troops are battling the Islamists. Timeline: al Shabab attacks in Somalia, other nations

Kenyan President Uhuru Kenyatta said in a televised address to the nation late Saturday that he had “personally lost family members in the Westgate attack”.

“Let me make it clear. We shall hunt down the perpetrators wherever they run to. We shall get them. We shall punish them for this heinous crime,” he vowed.

The Westgate mall is popular with wealthy Kenyans and expatriates, and was packed with around 1,000 shoppers when the gunmen marched in at midday Saturday, tossed grenades and sprayed automatic gunfire on terrified people.

Security agencies have long feared that the shopping centre could be targeted by Al Qaeda-linked groups.

The attack was the worst in Nairobi since an Al-Qaeda bombing at the US embassy killed more than 200 in 1998.

After a day and night of sometimes ferocious gun battles, security sources said police and soldiers had finally “pinned down” the gunmen. The Kenyan Red Cross appealed for blood donations and authorities urged residents to steer clear of the area.

“We are still battling with the attackers and our forces have managed to maroon the attackers on one of the floors,” said Kenyan military spokesman Colonel Cyrus Oguna.

“We still do not know the number of hostages nor the attackers but we hope to bring this to end today,” he added.

An AFP correspondent at the scene said a final assault appeared to be in motion, and saw two wounded Kenyan soldiers evacuated from the complex and taken away by ambulance. A woman who had spent a cold night hiding under a parked car was also rescued.

Two Indians, including an 8-year-old boy, were among 43 killed and four other Indian nationals injured in the attack by armed terrorists in the mall.

While one of the victims 40-year-old Sridhar Natarajan was working with a pharma firm, the boy Paramshu Jain was the son of a manager of the local Bank of Baroda branch, Syed Akbaruddin, spokesperson in the ministry of external affairs (Government of India) said.

Four Indians, including two women and a girl, were injured in the attack and are receiving medical treatment, the spokesperson said.

India’s mission in Nairboi is in touch with the families of the deceased, the spokesperson said.

“#India’s Mission in Nairobi in touch with families of – Sridhar Natarajan 40 years and Paramshu Jain, 8 years who tragically died in attack,” he also tweeted.

Gujarat chief minister Narendra Modi also on Sunday expressed his condolences for the people who died in the ‘terrorist’ attack in Kenya and said that “the time has come to take steps to wipe out terrorism from the world.”‘

One teenage survivor recounted to AFP how he played dead to avoid being killed.

“I heard screams and gunshots all over the place. I got scared. I tried to run down the stairs and saw someone running towards the top, I ran back and hid behind one of the cars,” 18-year-old Umar Ahmed told AFP.

In the hours after the attack began, shocked people of all ages and races could be seen running away from the mall, some clutching babies, while others crawled along walls to avoid stray bullets.

“They spoke something that seemed like Arabic or Somali,” said a man who escaped the mall and gave his name only as Jay. “I saw people being executed after being asked to say something.”

“Hostage numbers still unknown, but they are in several locations. No communication as yet. Upper levels (of the mall) have been secured,” the government’s National Disaster Operation Centre said in a situation update posted on Twitter. Shabab Twitter account suspended after attack claims

An AFP correspondent at the scene said operations by security forces were continuing, 22 hours after the attack began and as dawn approached in the Kenyan capital.

What happend on Saturday

Terrified shoppers huddled in back hallways and prayed they would not be found by the Islamic extremist gunmen lobbing grenades and firing assault rifles inside Nairobi’s top mall Saturday.

When the way appeared clear, crying mothers clutching small children and blood-splattered men sprinted out of the four-story mall.

Foreigners were among the casualties. France’s president said that two French women were killed. Two Canadians were killed, including a diplomat, said the Candadian prime minister. Four American citizens were reported injured but not killed in the attack, the State Department said Saturday.

As the attack began shortly after noon Saturday, the al-Qaida-linked gunmen asked the victims they had cornered if they were Muslim: Those who answered yes were free to go, several witnesses said. The non-Muslims were not.

Police and military surrounded the huge shopping complex as helicopters buzzed overhead. An Associated Press reporter said he saw a wounded Kenyan soldier put into an ambulance at nightfall, an indication, perhaps, of a continuing shoot-out inside.

Witnesses said at least five gunmen – including at least one woman – first attacked an outdoor cafe at Nairobi’s Westgate Mall, a shiny, new shopping center that includes Nike, Adidas and Bose stores. The mall’s ownership is Israeli, and security experts have long said the structure made an attractive terrorist target.

The attack began shortly after noon with bursts of gunfire and grenades. Shoppers – expatriates and affluent Kenyans – fled in any direction that might be safe: into back corners of stores, back service hallways and bank vaults. Over the next several hours, pockets of people trickled out of the mall as undercover police moved in. Some of the wounded were trundled out in shopping carts.

“We started by hearing gunshots downstairs and outside. Later we heard them come inside. We took cover. Then we saw two gunmen wearing black turbans. I saw them shoot,” said Patrick Kuria, an employee at Artcaffe, the restaurant with shady outdoor seating.

Frank Mugungu, an off-duty army sergeant major, said he saw four male attackers and one female attacker. “One was Somali,” he said, adding that the others were black, suggesting that they could have been Kenyan or another nationality.

Al-Shabab, on its Twitter feed, said that it has many times warned Kenya’s government that failure to remove its forces from Somalia “would have severe consequences.” The group claimed that its gunmen had killed 100 people, but its assertions are often exaggerated.

“The attack at #WestgateMall is just a very tiny fraction of what Muslims in Somalia experience at the hands of Kenyan invaders,” al-Shabab said. 26/11-style terror strike in Nairobi mall

Another tweet said: “For long we have waged war against the Kenyans in our land, now it’s time to shift the battleground and take the war to their land #Westgate.”

Al-Shabab’s Twitter account was suspended shortly after its claim of responsibility and threats against Kenya. Twitter’s terms of service forbids making threats.
Al-Shabab threatened in late 2011 to unleash a large-scale attack in Nairobi. Kenya has seen a regular spate of grenade attacks since then but never such a large terrorist assault.

The US embassy in Nairobi said it was in contact with local authorities and offered assistance. Some British security personnel assisted in the response.

The gunmen told hostages that non-Muslims would be targeted, said Elijah Kamau, who was at the mall at the time of the midday attack.

“The gunmen told Muslims to stand up and leave. They were safe, and non-Muslims would be targeted,” he said.

Jay Patel, who sought cover on an upper floor in the mall when shooting began, said that when he looked out of a window onto the upper parking deck of the mall he saw the gunmen with a group of people. Patel said that as the attackers were talking, some of the people stood up and left and the others were shot.

The attack was carried out by terrorists, said police chief Benson Kibue. He did not specify a group. He said it was likely that no more than 10 attackers were involved.

Somalia’s president – the leader of a neighboring country familiar with terrorist attacks – said his nation knows “only too well the human costs of violence like this” as he extended prayers to those in Kenya.

“These heartless acts against defenseless civilians, including innocent children, are beyond the pale and cannot be tolerated. We stand shoulder to shoulder with Kenya in its time of grief for these lives lost and the many injured,” President Hassan Sheikh Mohamud said.

The gunmen carried AK-47s and wore vests with hand grenades on them, said Manish Turohit, 18, who hid in a parking garage for two hours.

“They just came in and threw a grenade. We were running and they opened fire. They were shouting and firing,” he said after marching out of the mall in a line of 15 people who all held their hands in the air.

Kenyan authorities said they have thwarted other large-scale attacks targeting public spaces. Kenyan police said in September 2012 they disrupted a major terrorist attack in its final stages of planning, arresting two people with explosive devices and a cache of weapons and ammunition.

Anti-terror Police Unit boss Boniface Mwaniki said vests found were similar to those used in attacks that killed 76 people in Uganda who gathered to watch the soccer World Cup finals on TV in July 2010.