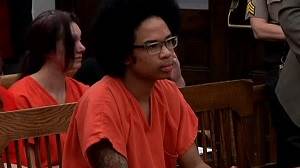 HELENA – Delano Martelos St. Machael McKenzie, a Jamaican man who reportedly posed as an IRS agent and flew to Helena to collect reported tax money related to a bogus lottery win, pleaded not guilty on Wednesday.

McKenzie was detained several weeks ago after officers used an undercover wire on the target of the scam, referenced as “F.C.” in court documents, and McKenzie accepted what he believed to be $10,000 in cash.

According to court documents, F.C. had previously met with a woman claiming to be the lottery agent, paying out at least $20,000 in cash.

The money was supposed to be for fees and taxes from the lottery winnings.

The victim had apparently taken out a loan from the bank to pay the debts, in order to someday receive winnings in excess of $2.5 million dollars and a 2014 Buick Lacrosse.

During Wednesday’s court session, Judge Menehan denied a bail reduction despite a plea made by phone from someone claiming to be McKenzie’s aunt from New York.

McKenzie faces up to 10 years in prison on the felony theft common scheme charge, and a fine up to $50,000.

McKenzie’s trial has been scheduled for June 30th.

0 thoughts on “DELANO SAY NOT GUILTY”