DEN IS WHO SAY GAZA SLIM & OCTANE DID DEH……..AND IS WHO SHE MARRIED TO? 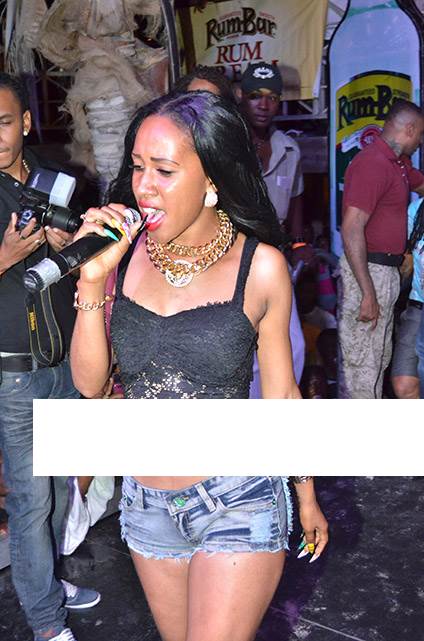 CURTIS CAMPBELL, STAR Writer
Dancehall artiste Vawnessa Bling aka Gaza Slim, has denied allegations by websites that she is involved in a intimate relationship with Reggae/dancehall artiste I-Octane.
A popular website has also alleged that the One Man singer recently received strict instructions from Vybz Kartel to end her relationship with I-Octane, however she says the websites are telling lies for views.
“People too wicked first and foremost. I have not received any message from Vybz Kartel complaining about me being in a relationship with I-Octane and the world done know sey me and I-Octane nuh inna nothing, even Vybz Kartel know that,” she said.
Incorrect judgement
The artiste recently released a collaborative effort with I-Octane called Cya Do It. She believes the collaboration has caused some persons to make an incorrect judgement.
“Me and I-Octane are just friends in the music business. I am a married woman and I-Octane is in a relationship. Mi nuh like publicity stunt so I don’t want people to take this for a joke and even feel like a my team a duh this. Mi nuh like nuh controversy and mi is a married woman, me Vawnessa Bling otherwise known as Gaza Slim is a married lady. Suh people please stop it, mi nuh like it,” she said.
Vawnessa Bling was recently freed of allegedly perverting the course of justice. The deejay says she has turned another page in her life and is currently booked for several shows outside of the island.
In coming weeks she is expected to perform at events in the UK, Trinidad, Turks and Caicos, Bahamas, Barbados as well as the local Boom energy drink tour. The singer recently launched her own record label called VB records, however she is still signed to Vybz Kartel’s Adidjahiem Records.
“I prayed so hard, give praises to God and big up Vybz Kartel, Shawn Storm and everybody else. Keep the faith,” she said.
She recently filmed music videos for How To Treat A Girl and Cya Do It and will a release new single Body Wey A Bomb

0 thoughts on “DEN IS WHO SAY GAZA SLIM & OCTANE DID DEH……..AND IS WHO SHE MARRIED TO?”