DESPITE BONE CANCER LLOYD WANTS TO BECOME A LAWYER 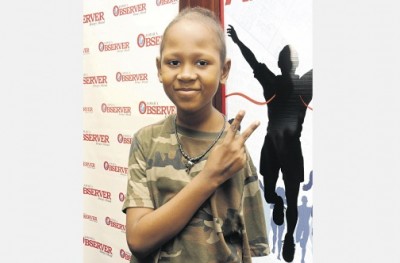 TEN-YEAR-OLD Lloyd DaCosta may be battling bone cancer but the dream of someday growing up to become a lawyer will not die for this brave young boy.
And not even the amputation of his dominant arm has prevented young Lloyd from hanging on to this goal as he learnt to write and play the keyboard with his other arm within days of his operation.
“I want to be a lawyer because I want to help bring peace and justice to the world,” he said.
Lloyd was on a panel of guests at last week’s Jamaica Observer Monday Exchange at the newspaper’s Beechwood Avenue head office, assembled to discuss child cancer ahead of LIME Foundation’s 6k Run-Walk scheduled for January 18 at which funds will be raised to help treat children with cancer.
Lloyd, who expressed gratitude for what the Lime Foundation is doing to help children like himself, said he has since got over the fact that he was diagnosed with cancer.
”I have gone past it. It never really bother me that I had to cut off my hand,” he said.
The only thing that makes him sad is the fact that he is no longer in the regular school system since doctors have advised that it is best he be kept out of the general school population for now as he might be more susceptible to infections.
His mother, Annalease Welly-DaCosta, said her son has been an inspiration to many including herself since he was diagnosed a year ago.
“He would always say, ‘Mommy, don’t worry, it’s going to be all right’.
“He was left handed and when his dominant hand was gone, on the third day of the operation he told me to give him a pen and all I did was show him how to hold a pen and he started practising,” she said.
And although he has not been to school since he was diagnosed, his mother ensures he does not miss out on his education as a private tutor now visits his home to give him work from the grade four and five curriculum as well as music lessons.
She recalled that she got the diagnosis on the very day he turned 10 on January 23, 2014.
“In November 2013 I was going to the doctor and he said he was going to come with me because he didn’t like how his hand was feeling. I asked if it was hurting and he said, ‘No’, but he didn’t like how it felt,” she recalled
She took him to the doctor and that was the beginning of a series of tests which finally led to her being told the dreadful news that there was a cancerous tumour in his hand.
“When I got that news I freaked out. I begged God. I prayed; I bargained with God because I knew the ultimate that was going to happen… his arm had to go,” she said.
But not even she was prepared for how bravely he would take the news that not only did he have cancer but that he would also lose his arm.
“He said to me, ‘Suppose is cancer I have?’ So I asked him what would he do if he had cancer and he said, ‘Well, maybe I will just have to do the chemo’,” she recalled.
And when the news was broken to him that his arm would have to go, DaCosta said he cried on that day but almost immediately he accepted that it was necessary if his life was to be saved.
“He doesn’t feel any way when he tells you he has cancer and you cry because he likes to see that type of emotion that you feel. One day he said to me, ‘You know that you really tough, mommy’, and I said, ‘Why you say that?’ And he said, ‘Because you never cry’.”
She said she told him that she didn’t cry in front of him because she wanted to be strong for him, and he said, “No, no, don’t be strong for me, cry with me.”
“But I can’t cry in front of him to let him get weak but in my quiet time I will cry and scream in a corner where no one is hearing until I feel a little better,” she said.
DaCosta said she is however touched by the support she has been receiving since.
“I had a very stressful 2014 but I feel blessed to have had the support of a lot of persons including Sandals Foundation and my family and my husband’s family. I feel like I am well loved by God; I must be very special,” she said.