DI SENDER ASKING-Star still a reside on JMG? They paying you rent and utilities?

BUT NOT ONLY STAR OOO 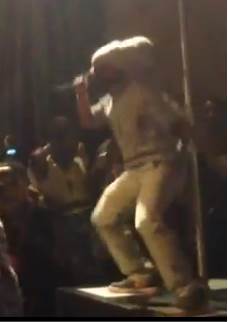 A video of a Rastafarian selector performing at a gay party has evoked the anger of several viewers on Internet website YouTube and other social media platforms.

The video, ‘Toronto Gay Dancehall Queens Having a Good Time on Stage’ was posted on YouTube in August. However, it has recently gone viral on various social networking sites and has received more than 11,000 views in less than a week.

In the almost three-minute long video, the mostly male patrons could be seen dancing up a storm to the latest dancehall songs, including QQ’s One Drop. They effortlessly performed the dance move.

Before 19 seconds into the video, the controversial DJ made his appearance by running on to a stage chasing off patrons. “Hol’ on deh! Mi a do sumn yah suh! Sorry deh! Sorry deh,” he said while pushing three men off the stage to create enough room.

Clad in créme pants, with grey T-shirt and matching turban, the DJ began jumping to the beat of Konshen’s Walk And Whine and yelling, “whoiiiiii!! dis a nuh boring time!!” Fuelling the energy of the gyrating male patrons.

At that point, a particularly passionate male couple took the spotlight grinding on each other with one man on his head top, while his partner held him firmly by the hips ‘daggering’ him from behind, much to the delight of the other patrons and the spirited ras.

Men dressed in full female apparel made their presence known when Gaza Slim’s Independent Ladies blared through the speakers.

The dynamic DJ, feeding off the vibes of the crowd yelled, “Weh all a di independent ladies!!” and the more effeminate patrons could be seen showing their appreciation for the hit song by bussing a whine and strutting to the middle of the dance floor.

As the video concluded, the Ras could be seen jumping on stage and yelling “All who waa party sehh party!! Party mi sehh!!” to cheers of approval from patrons.

Unlike the patrons in the video who were appreciative of the Rastaman’s efforts, some viewers were not as kind. One commented, “I aint mad at nobody in this video but the Rasta. He don’t need to be proclaiming that anymore.”

But to the displeasure of some viewers, others were supportive of the Rastaman stating that he was only doing his job.

“The dread in the far background, leave him alone, Rasta community doesn’t care, he’s dancing with nobody, the man is a MC and doing his work,” a user commented.

While another stated, “It’s his job to make sure that people having a good time, free country dis!”

0 thoughts on “DI SENDER ASKING-Star still a reside on JMG? They paying you rent and utilities?”