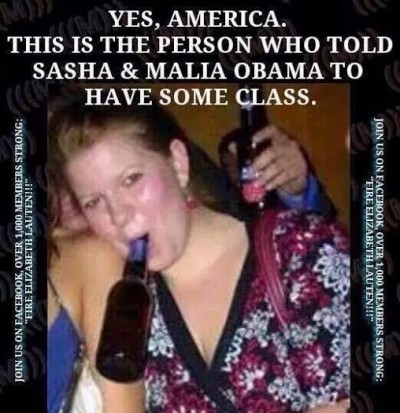 Until her resignation this morning, Lauten served as communications director for Rep. Steven Fincher, a Tennessee Republican. In the face of criticism about her attack on the Obama daughters, Lauten said that “many hours of prayer” helped her realize that her Facebook screed was “hurtful.”
Lauten, pictured above, was arrested in December 2000 for misdemeanor larceny, according to court records. Lauten, then 17, was collared for stealing from a Belk department store in her North Carolina hometown.
Because Lauten was a first-time offender, her case was handled via the District Court’s deferred prosecution program, which resulted in the charge’s eventual dismissal after the future scold stayed out of trouble for a prescribed period.
Since Lauten was just another teenager caught shoplifting at the mall, it appears unlikely that she was publicly pilloried for her lack of class, nor were her parents criticized as poor role models.