EWEDU THE VEGETABLE THAT DOES MANY THINGS 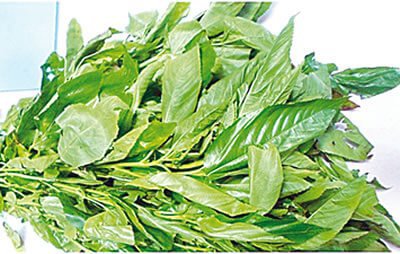 AMONG the Yorubas in South Western Nigeria, the jute leaves, locally called ewedu may be considered the king of all other vegetables. It is almost impossible to find a Yoruba person that doesn’t relish the succulent vegetable which has been discovered to have numerous nutritional values but several health benefits as well. Though the jute leaf is most synonymous with the Yorubas of South West, Nigeria, it is equally consumed by the Hausas in the North where it is called turgunuwa or lallo.

Corchorus olitorious, as it is botanically called, is an annual much branched herb belonging to the family Malvaceae. According to research, its roots have been proven very useful in the treatment of toothache. The jute leaves, aside from their nutritional values, are useful as antibiotics in the treatment of gonorrhoea and as purgative and febrifuge.

Nutritionally, jute leaves contains a lot of vitamins, beta-carotene, antioxidants and are very high in fibre.

A study that was published in the International Journal of Enhanced Research in Science, Technology and Engineering, about three years ago, described it as a unique plant that is rich in many chemical compounds. Jute leaves were reported to contain as many as 17 active nutrients including protein, fat, carbohydrate, fibre, ash, calcium, potassium, iron, sodium, phosphorous, beta-carotene, thiamine, riboflavin, niacin and ascorbic acid.

“The nutritional dexterity of ewedu is amazing,” said Evalena Okeze, a Lagos -based nutritionist and dietician. “In fact, I advise my clients to make it into smoothie and just drink it. Ewedu leaves contain fibre which is amazing for weight management. The beta-carotene present in the leaves is excellent for eye sight. It contains lots of vitamin C for smooth and clear skin, strong immune cells, and fast wound-healing. It should be a part of everyone’s nutrition.”

Okeze added that for pregnant women, it should be a nutrition ritual. “In situations whereby a woman experiences prolonged labour, she can be given some ewedu juice made from squeezing the stems and leaves of the plant. Also, for nursing mothers who are not producing enough breast milk, ewedu is recommended because it has also been discovered to aid milk secretion in lactating mothers.”

The study discovered an array of health benefits of jute plant. According to the reports of its findings, Jute leaves contain an abundance of antioxidants that is protective from chronic diseases such as heart disease, cancer, diabetes, and hypertension as well as other medical conditions. It was reported that Ayurvedics use the leaves for ascites, pain, piles (laxative), and tumours. Also, the leaves are used for cystitis, dysuria, and fever.

In the study, the anti-inflammatory profile of the chloroform extract of jute leaves was measured using carrageenan induced paw edema test in rats. The extract at all concentrations (20, 50 and 100 mg/kg) caused a significant decrease in the thickness of edematous paw for the first six hours compared to the control. The activity diminished in the last two hours of the experimental time compared to the control group. The positive reference compound used was acetylsalicyclic acid (100 mg/kg) which produced significant antiinflammatory activity. The test revealed the ability of the extract to block the inflammatory phase of the formalin test, which confirmed the folkloric use of jute leaves as a demulcent.

Based on those findings, the chloroform extract of jute was confirmed to possess antinociceptive and antiinflammatory activities which confirmed the traditional claims of using it to treat various ailments related to inflammation and pain.

Also in the study, the antitumour promoting activity was discovered in two active components of jute leaves. The components showed activity against tumour promoter-induced Epstein-Barr virus (EBV) activation in Raji cells. They were isolated from the fresh leaves of jute leaves. The active components were colorless oils and were identified as phytol (3,7,11,15-tetramethyl-2- hexadecen-1-ol) and monogalactosyl-diacylglycerol (1,2-di-α-linolenoyl-3-β-D-galactopyranosylglycerol ). The antitumor-promoting activity was examined by an immunoblotting analysis using a mouse antiserum against EBV producer P3HR-1 cells. Phytol and monogalactosyldiacylglycerol completely inhibited the induction of EBV early antigen at concentrations of 15 µg/mL (50.7 µM) and 30 µg/mL (38.8 µM), respectively. However insufficient inhibitory effects were shown by both compounds at concentrations of 10 µg/mL and 25 µg/mL, respectively. That test also revealed that both components increased gradually with an increasing in the period of treatment with hot water, indicating that the components were not easily decomposed by high temperature.

These findings therefore suggest that treatment of vegetables with hot water effectively increased the amount of active components with activity against tumour-promoting chemicals that may be consumed together with food.

The study concluded that all varieties of jute leaves have both vegetable and medicinal values. Jute leaf has long been used as a remedy in many cultures. The jute leaf contains over 17 active nutrient compounds including many minerals, amino acids and vitamins. Today, this multiutility versatile plant part is considered to cure mankind’s different health problems. There are many natural medicinal herbs, but jute leaf is granted with vast array of healing benefits.

Although, jute leaf has wide spectrum of the properties and uses. Jute leaf contains protein, calories, fibres and as well as antitumour promoters; Phytol and Monogalactosyl-diacylglycerol. It may reduce risk of cancer. Therefore, jute leaf has a great importance in terms of human nutrition, health and beauty care.