The 9:30 p.m. chaos ensued roughly around the time as the Jamaican superstar won the gold in the 100-meter dash at the Rio Games for the third consecutive time, making Olympic history. 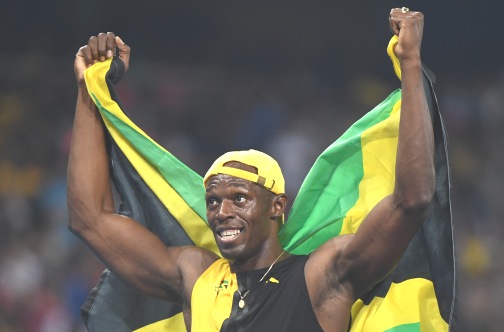 A source confirmed to The Post that people “cheering and banging” as they watched the Olympic Games may have been mistaken for the sounds of gunshots.

“There were people cheering and possibly a glass got knocked over and all hell broke loose,” another source said.

The NYPD received reports of shots fired at two different terminals, sending panicked travelers in the airport running for their lives and causing a massive evacuation.

Authorities said no evidence of gunfire was found.

The 911 calls for reported shots fired first came in from Terminal 8 near the departures area at around 9:30 p.m. About 45 minutes later, a second call came in at in Terminal 1. Both terminals were evacuated.

Flier Bruce Cumings, 72, was sitting in between gates 1 and 2 in Terminal 1 reading when he heard what sounded like “four or five rapid-fire gunshots” go off.

“We heard them – they were very loud,” said Cumings, a history professor at the University of Chicago who was awaiting a flight headed to Budapest via Paris.

Cumings called the theory of travelers cheering the Olympic Games being mistaken for gunfire “poppycock,” noting that the TVs above his head were tuned to CNN and not the Olympics, he said.

“They were loud gunshots, perhaps blanks, or from a tape,” Cumings said.

A law enforcement source told The Post that “there is no indication that blanks were fired.”

The incident also prompted the precautionary closure of the Van Wyck Expressway, which runs near the airport.

“Everyone flattened themselves under the seats for about 15 minutes until we were led out of the terminal. [We were] required to have our hands in the air, cops with guns in their hands everywhere,” he said.

Employees for American Airlines, which utilizes Terminal 8, confirmed that the TVs inside the terminal were set to the Olympics.

An official directly involved in the investigation said that authorities are “definitely looking at” the possibility of people celebrating Bolt’s victory as the cause of the noise, but are also looking at the possibility that metal chairs inside a bar in Terminal 8 fell over and knocked into metal partitions, which also fell over producing noises that sounded like gunshots.

“We’re continuing to investigate because we want to make sure that nobody was testing the system,” the official said, noting that detectives were actively reviewing security footage throughout the terminal as part of an ongoing investigation.