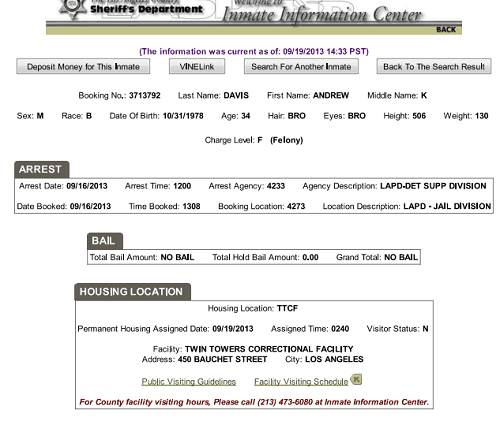 Andrew Flippa Moggla/Mafia Davis who was taken into custody on September 16,2013 by the LAPD has been given a court date for October 2, 2013, in the Los Angeles Municipal Building Court Division 10.His charges are still unstated by the LAPD . The Entertainer/ Dancehall celebrity has been moved a total of three times within the LAPD’s detention facility. His last location was Twin Towers Correctional Facility where offenders that require medical treatment are housed.
Reports are that, the entertainer has entered the United States illegally a total of three times and this may also be included in his unstated charges. Also, his common law wife known to many as ‘Marsha’ is also being held in Camden New Jersey jail facility along with his brother Kemar Davis 22 and friend Sidonie Mcleod 28. McLeod was once the girlfriend of popular Jamaican Entertainer, ”Elephantman’, and former employee of Zip FM in Jamaica. The charges that surround the incarceration of the Entertainer’s family are said to be drug related.
In March of this year, an email was received stating that