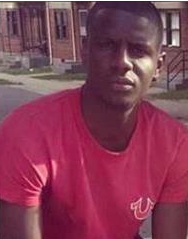 **I know some of you may have wondered why I hadn’t put anything about this up…Mi jus tireddddd…God knows …tired of the racisim ..the over-dramatization but now I am fully on board…Justice for this young man***

The death of Freddie Gray — a 25-year-old Baltimore man who died in police custody, sparking days of unrest in Maryland and around the country — has been ruled a homicide and the arresting officers will face charges in the young man’s death, Maryland State’s Attorney Marilyn Mosby said Friday.

Mosby said three Baltimore police officers illegally arrested Gray on April 12. She also said a knife that Gray had was not illegal.

“No crime was committed” by Gray before officers put him in a “leg lace restraint,” Mosby said, adding that officers failed to put Gray in a seatbelt five times after he was put into a police van. She said Gray had asked twice for a medic.

It’s still unclear how the 25-year-old suffered fatal injuries while in police custody.

Gray’s death touched off days of protest, which turned violent last weekend when demonstrators began breaking into stores, looting and setting fires to the neighborhood. Mosby on Friday told community members she has heard their demands and vowed to “fight for justice” on their behalf, but urged them to continue demonstrating peacefully.

“I heard your call for ‘no justice, no peace,’” Mosby said. “Your peace is sincerely needed.”