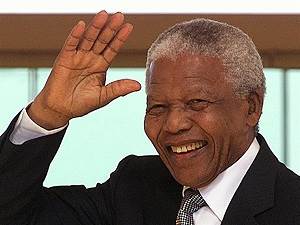 Nelson Mandela, the revered South African anti-apartheid icon who spent 27 years in prison, led his country to democracy and became its first black president, died Thursday at home. He was 95.

Though he was in power for only five years, Mandela was a figure of enormous moral influence the world over – a symbol of revolution, resistance and triumph over racial segregation.

He inspired a generation of activists, left celebrities and world leaders star-struck, won the Nobel Peace Prize and raised millions for humanitarian causes.

South Africa is still bedeviled by challenges, from class inequality to political corruption to AIDS. And with Mandela’s death, it has lost a beacon of optimism.

Feb. 1990: NBC’s Robin Lloyd reports on Nelson Mandela on the eve of his release from prison in 1990. Mandela’s name has become a rallying cry for the overthrow of apartheid, but no one but prison guards and visitors have actually seen him since he was jailed 27 years ago.
Advertise | AdChoices

In his jailhouse memoirs, Mandela wrote that even after spending so many years in a Spartan cell on Robben Island – with one visitor a year and one letter every six months – he still had faith in human nature.

“No one is born hating another person because of the color of his skin, or his background, or his religion,” he wrote in “Long Walk to Freedom.”

Mandela retired from public life in 2004 with the half-joking directive, “Don’t call me, I’ll call you,” and had largely stepped out of the spotlight, spending much of his time with family in his childhood village.

His health had been fragile in recent years. He had spent almost three months in a hospital in Pretoria after being admitted in June for a recurring lung infection. He was released on Sept. 1.

In his later years, Mandela was known to his countrymen simply as Madiba, the name of his tribe and a mark of great honor. But when he was born on July 18, 1918, he was named Rolihlahla, which translated roughly – and prophetically – to “troublemaker.”

Mandela was nine when his father died, and he was sent from his rural village to the provincial capital to be raised by a fellow chief. The first member of his family to get a formal education, he went to boarding school and then enrolled in South Africa’s elite Fort Hare University, where his activism unfurled with a student boycott.

As a young law scholar, he joined the resurgent African National Congress just a few years before the National Party – controlled by the Afrikaners, the descendants of Dutch and French settlers – came to power on a platform of apartheid, in which the government enforced racial segregation and stripped non-whites of economic and political power.

As an ANC leader, Mandela advocated peaceful resistance against government discrimination and oppression – until 1961, when he launched a military wing called Spear of the Nation and a campaign of sabotage.

The next year, he was arrested and soon hit with treason charges. At the opening of his trial in 1964, he said his adoption of armed struggle was a last resort born of bloody crackdowns by the government.
Advertise | AdChoices

“Fifty years of non-violence had brought the African people nothing but more and more repressive legislation and fewer and few rights,” he said from the dock.

He was sentenced to life in prison and sent to Robben Island. As inmate No. 466/64, he slept on the floor of a six-foot-wide cell, did hard labor in a quarry, organized fellow prisoners – and earned a law degree by correspondence.

As the years passed, his incarceration drew ever more attention, with intensifying cries for his release as a global anti-apartheid movement gained traction. Songs were dedicated to him and 600 million people watched the Free Mandela concert at London’s Wembley Stadium in 1988.

In 1985, he turned down the government’s offer to free him if he renounced armed struggle against apartheid. It wasn’t until South African President P.W. Botha had a stroke and was replaced by F.W. de Klerk in 1989 that the stage was set for his release.

After a ban on the ANC was repealed, a whiter-haired Mandela walked out prison before a jubilant crowd and told a rally in Cape Town that the fight was far from over.

“Our struggle has reached a decisive moment,” he said. “We have waited too long for our freedom. We can no longer wait.”

Over the next two years, Mandela proved himself a formidable negotiator as he pushed South Africa toward its first multiracial elections amid tension and violence. He and de Klerk were honored with the 1993 Nobel Peace Prize for their efforts.

When the elections were held in April 1994, the ex-prisoner became the next president and embarked on a mission of racial reconciliation, government rebuilding and economic rehabilitation.

A year into his tenure, with racial tensions threatening to explode into civil war, Mandela orchestrated an iconic, unifying moment: He donned the green jersey of the Springboks rugby team – beloved by whites, despised by blacks – to present the World Cup trophy to the team captain while the stunned crowd erupted in cheers of “Nelson! Nelson!”

He chose to serve only one five-year term – during which he divorced his second wife, Winnie, a controversial activist, and married his third, Graca, the widow of the late president of Mozambique.
Advertise | AdChoices

After leaving politics, he concentrated on his philanthropic foundation. He began speaking out on AIDS, which had ravaged his country and which some critics said he had not made a priority as president.

When he officially announced he was leaving public life in 2004, it signaled he was slowing down, but he still made his presence known. For his 89th birthday, he launched a “council of elders,” statesmen and women from around the world who would promote peace. For his 90th, he celebrated at a star-studded concert in London’s Hyde Park.

As he noted in 2003, “If there is anything that would kill me it is to wake up in the morning not knowing what to do.”

In April, de Klerk was asked on the BBC if he feared that Mandela’s eventual death would expose fissures in South Africa that his grandfatherly presence had kept knitted together.

De Klerk said that Madiba would be just as unifying a force in death.

“When Mandela goes, it will be a moment when all South Africans put away their political differences, take hands, and will together honor maybe the biggest South African that has ever lived,” he said.

From prisoner to liberator, Nelson Mandela’s fight for equality in South Africa serves as a shining example of justice and peace. Here’s a look at the pi