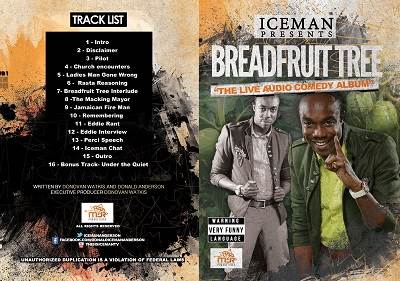 I want you give this youth a recognition.

Iceman really took over the 2013 in the comedy business. Same Iceman Star in the Ity and Fancy Cat Show, Same Iceman that is the voice of writer of the Cartoon Mek wi laugh along with Pretty Boy Floyd. (Soda Machine).

Last night he dropped a brand new video and released the first ever 16 track Comedy CD in Jamaica at Comedytainment by Spartan Health Club Court Yard. The Album Titled #breadfruit Tree is the first of it’s kind locally…and perhaps internationally. Only Kevin Hart and those other guys overseas doing album releases in comedy.. After listening to the album then you understand what the name signifies. (it’s close enough to #teamTessane’s Bread and Butter). He was the best on the show. He was the writer and voice behind all the Digicel ads last year and Lime took him up and make him the face and voice of all their ads. He won Best Actor in the Actor Boy Awards this year too. since then Lime has improved. He is very Talented. Jamaica’s Jamie Foxx. Only person in Jamaica I know can Sing, Act, Do Stand Up Comedy, has his own Radio Show (hot Ice) on hot102 and do Commercials. He used to wrote songs for Shaggy, Gramps Morgan now he is coming into his own Brand. Met his was the first voice on the Shotta movie soundtrack. (Check the movie again and watch the first scene in Miami that’s his voice on the song first) 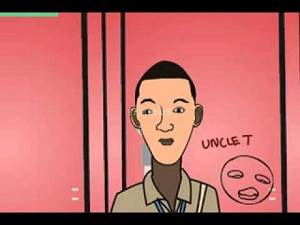 Here is the album art work and some pictures of him preforming on the show. The people should go out and support the Album. The album will be on iTunes and in local stores.

When good things going on in Jamaica it must get even bigger Publicity. Americans nuh talented like we dem just have more money. Jamaicans should support Jamaica. Big up ICEMAN. There is more I will tell you about him later! Jamaica slept on Tessanne. They should recognize him before overseas people take him.