After the death of their mother, Janet Palmer, in 2016, Andrade McLymont was left with no choice but to step up, take up the mantle and ensure the smooth running of the home while providing for his siblings. He says taking on the massive responsibility as the breadwinner of the family is no easy task because between shifts at Juici Patties where he works in May Pen, Clarendon, Andrade also has to play the roles of mom and dad at home.

Palmer died in November last year after being diagnosed with cancer. She only found out that she was suffering from the disease when it had reached stage four, and within a few months, she was dead. 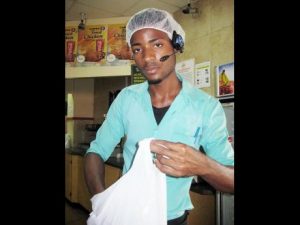 “She had breast cancer, which then spread to the brain, which caused a tumour and then it took root in the womb. At that stage, nothing could be done. She was a working woman – always working to take care of all seven of us. She played the mother and father role since my father died in 2004, and shortly after, my older brother who was helping out with the family finances, passed away also. She gone way too soon. The death of our mother suffocated our happiness, we are trying to move on, but her death still affects us,” he told Family & Religion.

Andrade says the death of his mother forced him to get a job as there was no food on the table and someone had to bring in the bread, so he couldn’t continue to sit at home and do nothing.

The 23-year-old, who lives in Palmetto Pen in the parish, supervises his younger siblings, a 17-year-old brother and 13-year-old sister who are both attending school.

“Although the salary leaves much to be desired, I still manage to make the most of it while trying to make ends meet. It’s hard at times, but I try even harder and do the best I can because only the best counts.”

The other siblings are also traumatised by the deaths of their mother and brother, and that continues to impact the family negatively. His elder sister continues to suffer because she was pregnant during the time of their mother’s death, which later led to a miscarriage. His elder brother, who has sickle cell disease, also took the death of his mother very hard, and that has aggravated his illness severely.

Taking on the responsibility of the entire family has affected his personal life and social life because there is simply no money to spend on other things.

“Mentally, it has been really challenging; it’s hard to cope sometimes because as a young man, I would just want to be free like others my age, but instead, I have to be responsible. So instead of buying clothes and shoes, I have to save it to buy books” he said.

To other individuals facing similar seemingly never-ending uphill battles, he says, “There is always hope; you just have to find that inner motivation from deep within. Always believe that you can make a change, and if you can help one, that one can help another, and together, we all will be able to gradually climb up the ladder. The gun thing nuh work out, and having younger siblings, I have to ensure I set a good example … giving up is not an answer,” he concluded.

5 thoughts on “GWAAN THRU YOUNG MAN”