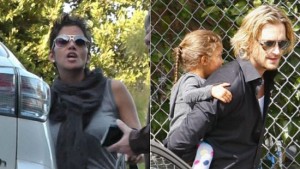 Halle Berry and her Baby’s Fava Gabriel Aubrey are both two cents short of a dollar. When TMZ broke the story that Halle Berry took Gabriel to court claiming that he was straightening and coloring their daughter’s hair (blonde) to make her appear “white” I thought that Halle was on her way to the P. Ward. Gabriel denied these claims and said the chlorine from their pool and the sun was making her hair lighter.
Surely there was no way this was true, it sounded too crazy. Well, it turns out Gabriel is losing it and Halle can prove it.
Halle took her azz down to a forensic consulting lab called Microtrace to get strands of Nahla’s hair tested (that she collected from her pink hairbrush) for chemicals.
As she suspected, the results showed that Gabriel was in fact bleaching– But records submitted to court recently contain a statement from Microtrace lab, where they say the hairs extracted from Nahla’s hair brush have undergone chemical treatment. The lab also reported “extensive” damage to the hair