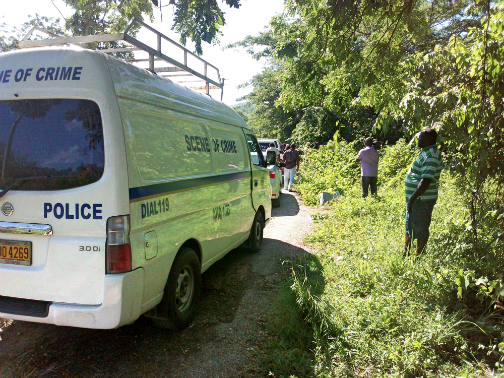 The Hanover police have theorised that robbery was the motive for the shooting death of a Hanover couple whose bullet-riddled bodies were discovered early yesterday in a thick clump of bushes in Mosquito Cove district, about three miles from their home.

The deceased have been identified as 56-year-old Balfour ‘Fire Bird’ Gordon, a bus operator, and Aleth Brown Gordon, 45, both of Eglin Town.

A third person, the couple’s cousin, who was also shot during the incident — which has left the Eglin Town community in shock and mourning — has been admitted in hospital.

“We believe that robbery was the motive. Although we are pursuing an individual, we have not yet arrested anybody,” Deputy Superintendent of Police (DSP) in charge of the Hanover Police Division, Arthel Colley, told the

Jamaica Observer yesterday.
It was reported about 11:30 pm Wednesday the couple, their 12-year-old son and the cousin were at home when they were attacked by a gunman.

It’s understood that the gunman tied up the couple and the cousin, and placed them in Gordon’s Toyota Coaster bus and drove them to Mosquito Cove where they were shot.

Police said the son of the deceased couple was told by the gunman to remain inside the house, before they left in the bus. The youngster reportedly complied.

“After the three were shot, the cousin, who received gunshot wounds to the side, managed to escape and was picked up by a motorist on the Point main road and taken to hospital,” police source said.

The bus was later driven by the gunman back to the home of the deceased and parked, while the couple’s son was reportedly told by the gunman that his parents would soon be back home, according to the police.

Police said the gunman then ransacked the house before leaving.

Yesterday, DSP Colley appealed to persons who may have information about the incident to contact the Lucea CIB at 956-2304 or 119.

Merit Dunwell, a bus operator, who said he had known Gordon for over 20 years, described him “as someone who can be depended on”.

Similar sentiments were expressed by the large number of persons who gathered at the scene of the crime.

Eleven murders have been recorded in the parish of Hanover since the start of the year.