HAR MADDA AND SISTER KNOW HAR COUSIN SLEEP WID HAR HUSBAND AND A HIDE IT , NOW SHE HEAR AND DONT KNOW WHAT TO DO

My heart is very heavy as I write to you. I don’t know what to do or who to trust any longer. This world is not a place where you trust people, especially people close to you. 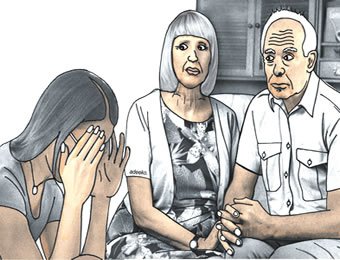 How do I handle this situation? What do I do with my husband I trusted so much? A man who is my world and my love? A man I gave all the love in my heart, who decided to cheat on me with my cousin; someone who I equally trusted and I thought was the best thing that could have happened to me. I thought she was God sent. I saw her as the angel God sent to me to help during my illness. I never knew she had other motives.

My husband and I met during youth service and started our relationship which later led to marriage. We waited on the Lord for the fruit of the womb for seven years after marriage. And when the blessing came, it was one sickness after the other during the first trimester of my pregnancy that I had to resign my appointment with the company I worked, so that I could take care of myself. I was not stable until I was about seven months gone, and then, there was no point going back.

Unfortunately, I fell ill again after I gave birth to my baby; a lovely baby girl, God’s blessing to my husband and I. It was as if Oreoluwa; my daughter, knew the circumstances on ground, she really is a peaceful and loving baby, never asking for too much attention or giving any problem.

I was very sick that and I stayed in the hospital for over three months. At a stage, my baby was discharged. Of course, my mother had to take her to her place. My husband, at about that time, was transferred to the Port Harcourt branch of his office. He works with a telecommunications company. So, once in a while when he came home, he would go and see Oreoluwa at my mother’s place.

My cousin, Toyosi, had lived with us since she was 12 years old, we are about the same age and practically grew together. She was at hand to help me. Mother raised us like sisters and outsiders would never know we were are not siblings. She raised us together. She would have been married before me, but her fiancée disappointed her a few weeks to the wedding day. He ran away with a former girlfriend of his.

Her sorrow at that time was one shared by every member of my family and we all stood by her to make sure that she got on her feet again. I really don’t understand why she chose to pay me back this way.

While I was in the hospital, she stood by me and really helped in taking care of my daughter.

When I was discharged from the hospital, I had to go and stay at my mother’s because as at then, I could not stay at home alone.

That weekend, my husband came home and he also decided to sleep over at my mother’s house, because according to him, he had no one to go home to. I was very excited because I felt he really loved and cared about me. I never knew he had other agendum.

I usually slept in my mother’s room, but because my husband was going to stay over, my mother said we could sleep in the guest room. I went to take a shower and got ready for bed in my mother’s room and by the time I went through my toilet routine, I became very tired and dozed off.

I didn’t know the time, but I guess it was late. I felt my mother and younger sister crept into the room and they were talking in hushed tones. Initially, I thought something happened to my baby, but I felt her beside me on the bed, breathing. They kept glancing at me to confirm if I was sleeping.

It was very hot as there was no light. Our generating set was faulty, so they could not put it on. They all went on the terrace to enjoy fresh air. Mummy and my sister came down to take care of Oreoluwa, leaving Toyosi and my husband.

Mummy said she thought they must have gone into their various rooms and left the door unlocked. She wanted to lock the door so she could wake me up to go and sleep in the guest room with my husband.

On a second thought, she wanted to double check, she climbed the staircase; lo and behold, she caught them right in the act. They were so engrossed in the act that they did not hear her coming. She also listened to their conversation; it was there she learnt that they had been doing this for some time now, even before I was discharged from the hospital. She did not keep quiet; she made them know she saw them by calling their names. She confronted them with all she heard.

They, however, pleaded that she should not tell me what she saw and heard. This was very overwhelming for her, that she needed to tell someone.

I overheard everything she said. I was too shocked to react, there and then. I, however, refused to go and share the bed with my husband that night. He also did not force me. He came to ask and I refused. Mother, didn’t even speak with him.

I am too shocked and sad to discuss this with anybody. My mother and sister haven’t told me either. They have been treating me with extra care since then. Toyosi, however, does not know that I am aware of the whole saga. I noticed she’s been avoiding my mother too and whenever she is with me when my mother was not there, she tries to be extra nice.

5 thoughts on “HAR MADDA AND SISTER KNOW HAR COUSIN SLEEP WID HAR HUSBAND AND A HIDE IT , NOW SHE HEAR AND DONT KNOW WHAT TO DO”