HE KILLED HER ONLY BROTHER, NOW HE WANTS TO MARRY HER 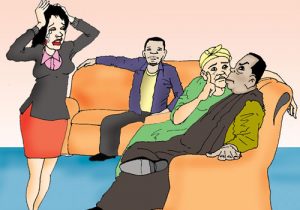 Please, help me out as I am torn between my love, loyalty and honour. I never thought I could ever be in this type of situation. I had a beautiful sheltered background. I cannot say my parents are rich, but we are not poor; we are very comfortable. Growing up was fun and we never lacked anything.

My parents are lawyers; they still practise till date, though they are advanced in age. They are well respected in the society and they equally respect themselves. In fact, I can rightly say that my father is a complete gentleman and if there is something called gentle woman, my mother can be rightly described as that.

We were a complete family, taught and learnt to be contented in what we have. Everything was fine until my elder brother who happened to be the first child of the family and the only male child died in his final year in school. His death was devastating, thank God for daddy, I don’t know how mum would have coped if not for his strong arms around her.

Our parents had four of us, three girls and a boy. I happen to be the last born of the family and I enjoyed up till now the benefits of the last child. I was in the primary school when my brother died or should I say when he was killed by suspected cultist in his final year as a law student in one of the federal universities.

I wasn’t too small to know that his death devastated my parents, but I was too small to know the details of his death. However, after his demise, my parents decided that none of us girls would attend a federal or state university, that was why I attended one of the first private universities in the country after which I travelled out of the country to the United States of America for my Masters degree in Economics and that was where I met Kelvin.

Our first meeting was at a friend’s birthday, it was a general get together and there was nothing to it until we met again at a singles programme organised by his church where Kelvin ministered. Sincerely, I was really impressed by his ministration and it gave me another impression of him. When he eventually asked me out a date, I was half way in love with him. He confided in me that he also fell in love with me the very first time he saw me, but he needed to pray and confirm if I was the woman for him.

I was brought up with the fear of the Lord and to love God, but I had a broader and better relationship with God when I became born again in the US. This really helped my relationship with Kelvin to grow as both of us shared the same faith and belief.

We had a strictly no sex before marriage and right from the outset, we prayed and believe that our relationship would end in marriage.

Throughout, my four years stay in the USA, my parents did not visit me, I visited them whenever they travelled to the United Kingdom on holidays and once in Dubai, so they hadn’t the opportunity of meeting Kelvin although, they both spoke with him several times on phone and they got along. I also met his parents several times, especially his mother who was always around to check on her children as all of them lived and studied in the USA. Fortunately, we got along from the very first day and she always referred to me as the daughter she never had. Incidentally, Kelvin also is the first born of his family and his mother gave birth to four boys.

We always spoke about our families and I have had cause to tell him about my elder brother who was killed by suspected cultist while in school. I was surprised that not for once did Kelvin tell me that he knew anything about it. Although, he confessed to having left that same university where my brother was killed because of cultist activities, but he never told me he was rusticated for being a cultist.

After four years in the US, my parents felt it was time for me to return home. When I told Kelvin, he insisted that we should get engaged before I returned home. Our parents had nothing against this as both of us are no longer kids and he also had the intentions of returning home to test the waters with some business ideas.

It was agreed that we will get married when Kelvin returns to the country. I visited his parents, but they were unable to see my parents before Kelvin came into the country because his dad took ill and it was serious. This was the reason why Kelvin also had to come into the country earlier than scheduled.

When he came, he came to see my parents and I without delay. After he introduced himself, and spoke about his parents, I noticed that my mother became withdrawn. I wondered why, because ordinarily, my mother is a cheerful easy going woman. I tried to ask her what was wrong and bring her out of her shell, but she was withdrawn.

When Kelvin was ready to leave after lunch, my mother asked him to hold on as she wanted to ask him some questions. When she finished speaking with him, we all learnt that Kelvin is one of the cult guys who were arraigned in court over my brother’s death. He and the other members of his gang were rusticated from the university.

He was however able to avoid going to jail because of his father’s influence. He and his siblings were then sent abroad to continue their studies.

I was shocked when I heard this. Daddy had actually forgotten the faces of the perpetuators, but mummy said she would pick their faces anywhere if she sees them. Because of this and mummy’s emotional outburst, Kelvin had to leave in a hurry.

When he left, mummy told me without mincing words that I cannot marry my brother’s killer. She was so emotional about it that she almost fell ill again. My father cautioned her and asked her to be mindful of her health and be careful.

My father on his own part is ready to forget and let go so as not to mortgage my happiness because of what happened in the past, but my mother wouldn’t hear of it. Apart from my mother’s refusal, I am also worried and angered by the fact that despite the fact that he knew he was a part of those who killed my brother, he did not open up on it. I realise that even the worst person can change if touched by God, but why did he keep this fact away from me? What else is he still keeping from?

I am very sad and confused. I love Kelvin so much and I don’t know why he did this. Apart from my mother’s stance, I am yet to get over his betrayal if I can call it that. He has not stopped calling and apologising and pleading with me. Please, what should I do?