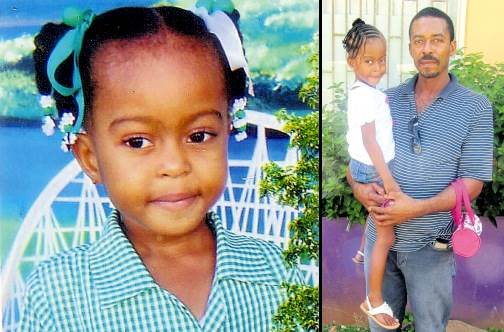 AT only five years old Cassie Drummond knows she wants to be a teacher when she grows up.

This is a dream her parents want her to accomplish. However, for now, their only desire is to see their sweet child do a critical heart surgery and for her to enjoy her childhood like other children do.

Everol Drummond said his daughter Cassie was diagnosed with having two holes in her heart a few months after birth. However, while one of the holes has closed, little Cassie still needs surgery.

She needs surgical correction of her large atrial septal defect and the small patent ductus arteriosus. It will cost approximately $700,000 to do the surgery at the University Hospital of the West Indies. Drummond said that his only other option is to join the long waiting list at the Bustamante Hospital for Children.

“They refer me to Children’s (Hospital) but they told me that they have a long waiting list so she no must get through until she is 14,” Drummond told the Jamaica Observer.

“Mi can’t afford that. I would do anything in the world to get it over,” he said, insisting that he desperately wants to help his youngest child.

Drummond said she was diagnosed with a heart condition at only four months old and since then it has been a challenging time for Cassie.

Although five years old, Cassie is quite small and is often thought to be a much younger child. However, her level of maturity has made people love this “tiny” little girl whom her father emphasised is “a sweet child”.

“It’s not because she don’t have food why she is this small, but because of her illness,” Drummond explained, underlining that due to her illness Cassie had lost her appetite.

But, it is not only her small physique which is a challenge for the young child. Cassie cannot play like other children her age because her heart beats extremely fasts whenever she does. Her illness has also resulted in her having slight bronchitis, a weak immune system, tiredness, and shortness of breath.

“She grow up with this … she knows. She is conscious of everything, but she never says she is worrying,” Drummond said.

“She is a very intelligent little girl. She can use a phone, she can use a tablet, she is doing pretty well in school, she is loved by almost everybody who meet her,” the doting father said.

Drummond said his daughter was to do surgery when she was three years old. However, doctors took a decision to wait until she was older. During that time one of two holes in little Cassie’s heart has closed.

“The hole is on top so it’s not a very major surgery. They have another surgery, but because of her weight they can’t do it,” he explained.

Drummond said he is appealing for help because he is not in a position to do much.

“If I was working, it wouldn’t be so hard,” Drummond said.

“I am unemployed right now. I have two children who just finish university and I didn’t let them take student loan,” the father explained, saying that those children are in the process of trying to secure employment.

Cassie’s mother is also unemployed and is currently undergoing training with the HEART Trust/ NTA.

The father said he has no other option but to seek help for his daughter even as he tries to secure employment.

Persons who wish to help Cassie may make a donation to her Scotiabank Brown’s Town account 424822.