Woman plans with lover and son to rob boss

A St Andrew domestic helper who conspired with two men ­— said to be her boyfriend and son — to rob her boss of almost $2 million worth of valuables along with a firearm, was slapped with a two-year prison sentence when she appeared in the Kingston and St Andrew Parish Court last week.

According to the convicted woman, Tanya Burrell, who was employed to the complainant for two years, she orchestrated the robbery because her boss’s son did not pay her for her domestic service.

The 35-year-old resident of Old Stony Hill Road planned with her two accomplices and went to the complainant’s home in Stony Hill on November 2 in the day, bound her and the complainant’s babysitter, and robbed the house of goods, including three television sets, jewellery, two laptop computers, US$5,000, a .38 revolver and 11 rounds of ammunition.

The police were summoned by both women who reported the robbery. Burrell also told the police that she was robbed of her cellular phone. 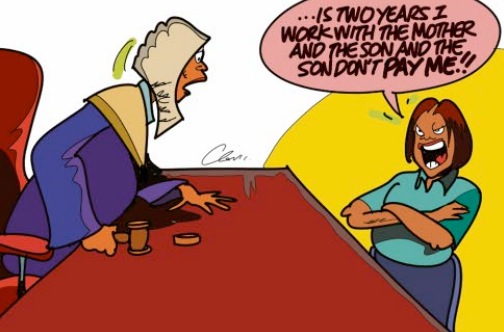 Following the investigation, Burrell was taken into custody and later admitted to the police that she had conspired with the men to commit the robbery. She was subsequently charged with conspiracy to robbery.

On Thursday when Burrell appeared in court, she pleaded guilty before Parish Judge Judith Pusey.

When asked why she committed the offence, an unrepentant Burrell said: “Is two years I work with the mother and the son and the son don’t pay me.”

The judge then asked why the son should have paid her and she replied that she had an agreement with both of them for them to pay her separately.

“And because of that you plan with your boyfriend and son to go and rob the complainant,” the judge said to Burrell before handing down the sentence.

The firearm and ammunition have since been found.