HIM SEH HIM NUH BAD ONLY FOOLISH 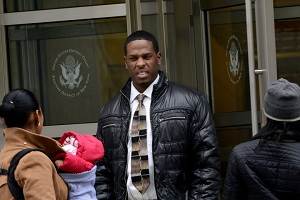 This dumb-fella is going to prison.

The disgraced son of a New York court officer who stole $2 million worth of iPad Minis — from the same JFK terminal that hosted the famed 1978 Lufthansa heist immortalized in the film “Goodfellas” — got hit with a two-year prison term in Brooklyn federal court Wednesday.

Along with two cronies, JFK cargo worker Renel Richardson used his inside information to steal roughly 3,600 of the coveted gadgets in an after hours raid last November.

The massive theft echoed the legendary Lucchese engineered heist of more than $5 million in cash and $900,000 in jewels in the same terminal. The robbery was dramatized in the 1990 Martin Scorsese film, which starred Robert DeNiro, Joe Pesci and Ray Liotta.

Richardson — who also faces a staggering $1.4 million in restitution — was eventually picked up for the crime after co-workers revealed that he had made inquiries about the iPad shipment in the days leading up to the theft.

Violating an underworld principle made famous by DeNiro’s character in the film to “never rat on your friends, and always keep your mouth shut,” Richardson eventually rolled on his accomplices and led investigators to a Long Island stash area where he believed the iPads were being stored, authorities said.

But prosecutors said the hi-tech loot eventually made its way to Virginia and was hidden in a forest before investigators were able to recover a small number of them.

With his crestfallen court officer father and newborn child looking on from the court gallery, Richardson begged Judge William Kuntz to not throw him in jail.

“I’m humbled and I’m remorseful,” Richardson said. “I apologize for any harm that I caused. I beg the mercy of the court.”

Kuntz seemed to stun the thief’s sobbing family when he handed down the two-year federal prison sentence.

Richardson’s attorneys had argued that he did not hold a position of authority at the airport and had simply pointed out the iPad trove to his accomplices.

But Kuntz rejected that defense and said that all airport workers are critical to maintaining safety.

“Employees at airports not only have opportunities to steal goods,” he said. “But to compromise lives…To violate your trust is to tee up a potential disaster.”

Richardson’s shattered mother collapsed after the sentencing and her husband tended to her on the floor for several minutes before leading her out of the courtroom.

Allowed to surrender after the holidays, Richardson left the courthouse with a throng of family members in tow. “I’m not a bad guy,” he said.

0 thoughts on “HIM SEH HIM NUH BAD ONLY FOOLISH”