HIP-HOP MANAGER GETS LIFE IN PRISON FOR COCAINE TRAFFICKING 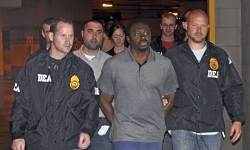 James Rosemond, a one-time prominent hip-hop manager who was convicted in 2012 of drug trafficking, was sentenced to life in prison in Brooklyn federal court on Friday.

Rosemond, known in the rap world as “Jimmy Henchman,” still faces separate charges in federal court in Manhattan of conspiracy to murder an associate of the rapper 50 Cent.

Rosemond was convicted of overseeing what officials said was an $11 million a year bicoastal cocaine trafficking business that used a musical equipment shipping company as cover to transport cocaine and cash.

“His image as a music impresario was a cover for the real Jimmy Rosemond, a thug in a suit,” said Brooklyn U.S. Attorney Loretta Lynch.