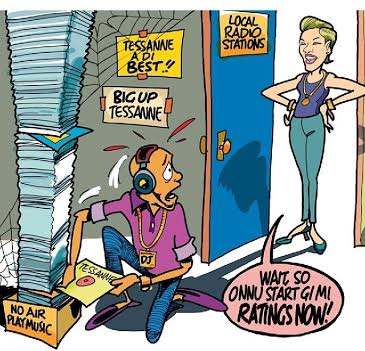 I don’t know if you follow the illuminati thing but if you look at a lot of famous artistes they always have someone around them die before they reach to a certain level. I found it strange that her friend died and she won the voice. Was her friend the sacrifice? Think about it. Look at Mavado as well…..

It’s kinda sad that tessanne had to go outside of the country before she got some kind of recognition. This cartoon is so argument. Jamaicans are jumping on the bandwagon but when she was making songs in Jamaica she was being overlooked. Jamaicans too foreign minded. If it no in a foreign or if it no hype dem no bizness.