HOW FIDEL CASTRO EVADED ASSASSINATION ATTEMPTS AND WHY HE LOVES AFRICA 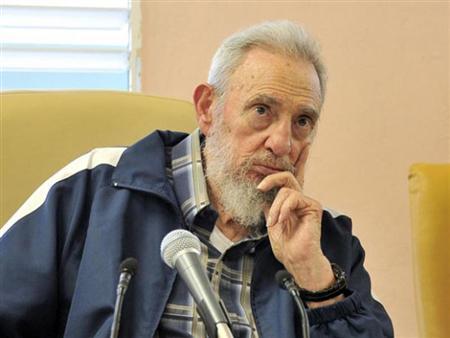 I have often wondered how Castro unlike many others have evaded the attempts to end his life by the CIA and others,and also his love for Africa.
To date there have been over 600 attempts to end Fidel’s life none of which materialized. One most memorable attempt was when his ex-girlfriend was asked to poison Fidel using a creme she was giving an ended up confessing what she was sent to do to him. During many overhead conversations by my great-grandmother one of the things she said about Cuba’s president was that as much as his enemies tried, they could not locate him. It was rumored that he never slept on the island but after knowing what I know now, I am certain he slept there but the ”forces” made sure his enemies could not locate him.
Cuba unlike many Caribbean countries, celebrate the vibrancy, richness and prowess of the African culture in it’s entirety. It is the home of many Santeros and Paleros. Castro in his fight, called upon the powers of his ancestors to fight his fight, a fight that he knew he was incapable of doing alone and that help is what has kept him alive until today.
Here are some excerpts of what has been written about Fidel and his inclusion of the powers of Africa
Fidel is to Cuba as Nanny was to Jamaica

Both in Cuba and Miami, circulate stories that refer to Fidel Castro’s relationship with African religions. Otherwise, say the Santeria and drainers Miami, does not explain how his “nemesis” has survived dozens of assassination attempts by the CIA and military organizations in exile. Nor explain how he has survived hundreds of psychic attacks and rituals of Palo Mayombe held against him.
On a trip to Cuba also several leaders of African religions, they confessed to be completely sure that Fidel is a ‘initiated’ and is protected by powerful priests of the post, which becomes something like the darker religion of how many exist in the Americas, as practitioners perform blood pacts with the dead and evil beings.
According to some drainers in exile, is an open secret among practitioners of this religion, that Fidel Castro was “broken”, ie ‘started’ at bat to land at the age of 6 years. Apparently, the future president was born on a farm on the outskirts of Havana, was very weak and ill, so a black conga, a friend of a servant mother, persuaded Mrs. Ruz for “scratch on a stick” and thus save his life.
During the ritual, Castro was subjected to a “record”, ie, a magical study on its future by drainer, to find out if healing is allowed by the orishas. Since that time, Fidel Castro is under the protection of Ayaguna, one manifestation of the great divinity. From Ayaguna Oggún, Chango, Argayu and Ochosi derive all the gods warriors. Of course, we are not certain that this really took place or simply stand before a legend, like many other circulating about the person of Castro.
However, Fidel himself, in a series of interviews on religious matters granted to Frei Betto, one of the leaders of the so-called liberation theology, refers to the magical and supernatural atmosphere that existed in the place where he spent his childhood where certainly the belief in Santeria and the stick was greatly extended.
In this book, Fidel and Religion, Castro says… “Those families had different types beliefs really remember how was the atmosphere of the field on this issue believed in God, believe in different saints Some of these saints were in the liturgy, saints were officers, others not. ” Certainly, it is refieron the Saints of Santeria.
Later he says that “in the Our Lady of Charity, patroness of Cuba, all had great belief. In addition, they believed in some saints who were not in the liturgy, as San Lazaro. Practically no one of those who did not believe San Lázaro. Many people also believed in spirits, in ghosts.
“I remember as a child hearing tales of spirits, ghosts, apparitions Everyone did stories but also believed in superstitions For example, I remember some… If a rooster crowed three times and no one answered, that could be a degracia, if an owl night and went flying and croaking was heard, then that could bring misfortune, if a salt shaker fell and broke, was bad, had to collect soil a little salt and toss it back over left shoulder …
“So the world in which I am born was a fairly primitive in the sense world, because there were all kinds of beliefs and all kinds of superstitions. Spirits, ghosts, soothsayers, all animals That was the room, saw it in all families and partly also in my own home. ”
When asked whether Frei Betto at home were images of Our Lady of Charity, Castro responds: “Many images of santoos, of Our Lady of Charity, patroness of Cuba … In my house also had a St. Lazarus, which was not within the official saints of the Catholic Church. ”
Indeed, San Lázaro, the most popular saint of Cuba, is the representation of Babalu Aye, the orisha of contagious diseases and one of the most revered deities of Santeria. Along with San Lazaro, another major Orisa is precisely the Our Lady of Charity, which represents Oshun, the goddess of sexuality, grace and beauty.
It is not surprising, therefore, that in this environment the child’s mother Fidel take him to a session stick with intent to heal. In this sense, Castro said that “even after the triumph of the Revolution, a day here in Havana, the went to visit (her mother and grandmother). They were the two. The grandmother had health problems, and the fourth It was full of saints, more promises. Because in this period of struggle, of great dangers, both my mother and my grandmother made all kinds of promises for life and security of us all. ”
Another passage from the book Fidel and Religion suggests some affection for the mysterious and supernatural the Cuban leader.
-Frei Betto: In what year were you born?
Fidel Castro: I was born in 1926 in the month of August, 13 August, if you want to know the time, I think it was around 2 in the morning. It seems that the night could have influenced my guerrilla spirit, in revolutionary activity; the influence of nature and time of birth …
-Frei Betto: Yes, in the conspiracy.
Fidel Castro: Some in the conspiracy.
-Frei Betto: At least the number 26 has some coincidences in your life.
Fidel Castro: Well, I was born in 1926, is true. I was 26 when I started the armed struggle, and he was born one day 13, which is half of 26 (…).
If I get to see, there could be some mystery around 26.
Taken from the hidden keys Book of world power, of Spanish journalists José Miguel Lesta and Pedrero. Editorial Edaf, 2006.
Photo: Representation of Palo Mayombe or Rule of Congo, in the Historical Museum of Guanabacoa, Havana. 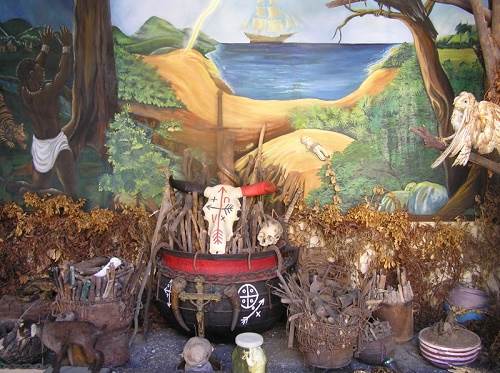