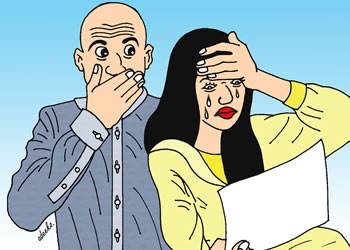 Dear Taiwo,
Kindly help me out of this tight situation I am in. I am in a big mess, the most painful thing, however, is that I created the mess and painful as it may be, I have to look for a way round it. I hate the we said so, that my family members will tell me, that is why I need your advice and that of your readers.

I am 38 and never had been married. Not that I have ever lacked relationships, but none of my relationships ever ended up in marriage like I always dreamt.

I am my mother’s only child, although, I have step siblings. I can rightly be described as being raised with the proverbial silver spoon. I have always known my mother to be a business woman with enough money to give me the best of everything I wanted.

Despite the fact that my father had other children, he always doted on me. Everyone knew that my mother is his favourite, so I lacked nothing growing up. Despite the fact that I haven’t been able to find marital happiness, I remain a happy person and I always desire to make people around me happy and this was what led me into my present predicament.

I work as a managing director in one of my father’s firms. I did not get the job because I am his favourite, I worked for it. As loving and as lenient as my father is, he does his things on merit. I finished from the university with a 2.1 in Economics after which I did my Masters degree in the same course and also sat for and passed other professional examinations.

Like I stated above, I entered the account department that fateful day and I met this young man; Tunji, with tears running down his face. He was too carried away with crying that he didn’t even notice that I entered. It was lunch hour, so the office was virtually empty.

I greeted him, but he didn’t answer, I moved close to him and touched him, he almost jumped out of his skin. I succeeded in calming him down and also made him tell me what was making him cry.

I learnt from Tunji that he just lost his wife to a rich neighbour. He told me how he had dated his wife right from when she was in the college of education and how he had had to foot the bills of her education when she became pregnant with their first child.

He told me he had always been managing to make ends meet with his family obligations and being his mother’s first child, he also had to struggle to help with caring for his siblings.

He said he sometime ago, suspected there was more to the relationship between his wife and their elderly neighbour and family friend, he raised the issue with the wife he loved so much, but she denied until he caught them both right in the act when they were having sex.

His wife had gone to uncle neighbours house, that’s what they called him. He said he went to check on her when she didn’t return home and their baby was crying. He received the shock of his life with what he saw and instead of being repentant, his wife became confrontational and even had the effrontery to tell him that the pregnancy she was carrying belonged to uncle neighbour and not him.

He stated that his wife couldn’t wait for the morning to come, before moving out into the apartment already rented for her by his neighbour and she went away with their two children and told him that she was tired of suffering.

According to Tunji, his wife’s betrayal and the fact that his neighbor also betrayed him was too much for him to bear. I was touched by the fact that Tunji blamed his misfortune on poverty. He said he could work and save money but for the fact that he had too much burden on him.

I felt sorry for him and made up my mind to help him. I asked him out for a drink after work, he was reluctant to come but I assured him that I would not ask for anything in return.

That was how we became friends and eventually we became lovers. He moved into my house and we became really close. When I introduced him to some of my friends and family members, they were against him. Most of them were of the feeling that he is a gold digger, but I thought differently. I never knew that men could be this bad. I made Tunji and raised him up from zero level. He studied for and passed his masters degree, of course when we started a relationship, he had to leave my firm, I used my connections to get him another good job.

After about two years, we decided to get married. I was however, surprised that my mother who should be the happiest was skeptical. She said she couldn’t lay her hands on why, but she didn’t trust Tunji a bit.

My mother, family and friends were right about him. Tunji, is deceptive, a liar and a cheat. Right now, I am eight months pregnant. He kept postponing our wedding. I got home before him last week and I saw a letter on my dressing table, I was curious and I read it, alas, it was a correspondence between Tunji and his wife. I couldn’t make much from the note I read. Apparently, his former wife visited his office and left a note when she didn’t meet him. I was able to pick that they have been relating and in fact they have been doing a lot together while he kept lying to me that he doesn’t even want to see her.

A lot of times, I would advise that he should relate with her because of his children, I never knew he had been deceiving me. I want to call the wedding off, but I have to tell my family and friends why. Please, help me. What can I do and how do I go about it?