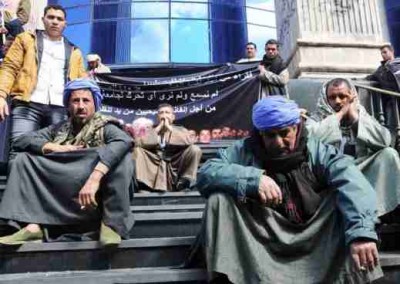 Militants affiliated with the Libyan branch of Islamic State (Isis) released a video on Sunday evening claiming to show the mass beheading of 21 Christians kidnapped in Libya.
The five-minute video is filmed in a style similar to that of previous videos depicting the murders of Western prisoners by Isis, an armed group that overran large parts of Iraq and Syria last year.
At least 21 Egyptians were kidnapped in two separate incidents in the city of Sirte, Libya in December and January.
Relatives of the hostages had previously identified the captured men in media released by Isis, including an online magazine published days ago.
The video depicts several men in orange jumpsuits being led along a beach, each accompanied by a masked militant. The men are made to kneel and one militant, dressed differently than the others, addresses the camera in North American-accented English.
“All crusaders: safety for you will be only wishes, especially if you are fighting us all together. Therefore we will fight you all together,” he says. “The sea you have hidden Sheikh Osama bin Laden’s body in, we swear to Allah we will mix it with your blood.”
The men are then laid face-down and simultaneously beheaded. The militant speaker then points northward and says: “We will conquer Rome, by Allah’s permission.”
Mina Thabet, a researcher at the Egyptian Commission for Rights and Freedoms, who has been communicating regularly with the families of the hostages, said that he believed that all but one of the victims in the video were Egyptians.
Thabet faulted the Egyptian government for what he asserted was a delayed response to the hostage crisis. “There is blood on the hands of the authorities who could have saved them but failed to.”
Advertisement
The Egyptian president, Abdel Fatah al-Sisi, called an urgent meeting of the national defence council and declared a seven-day mourning period, according to a statement from the president’s office.
“It is with deep sorrow that President Abdel Fatah al-Sisi mourns the Egyptian victims of an abhorrent act of terrorism in Libya and offers his deepest condolences to the Egyptian people for their grave loss,” the statement said.
He later said on national television that Egypt reserved the right to respond to the murders in a way it sees fit. Sisi warned that Cairo would choose the “necessary means and timing to avenge the criminal killings”.
Egypt announced on Friday an offer to facilitate the exit of Egyptians living in Libya. Tens of thousands of Egyptians live and work in the country.
The video was released the day after Isis took control of Sirte, birthplace of the late dictator Muammar Gaddafi, with gunmen capturing government buildings and radio stations, the third town in Libya it now holds.
Sirte had been held by Libya Dawn, an Islamist-led militia coalition that rebelled against the elected government in the summer and has been fighting a bitter war with government forces ever since.
Isis has emerged in recent weeks as a third side in a civil war, raising western fears that it will launch terror strikes across the Mediterranean against Europe. Fears of an attack by Isisprompted Italy to evacuate its Tripoli embassy on Sunday, the last major power to do so.
The British foreign secretary, Philip Hammond, condemned the murders and said the UK remains fully supportive of the UN’s efforts to build a national unity government for Libya.
“Such barbaric acts strengthen our determination to work with our partners to counter the expanding terrorist threat to Libya and the region,” he said.
“Acts of terrorism should not be allowed to undermine Libya’s political transition. We remain fully supportive of the UN’s efforts to build a national unity government for Libya and to bring a political solution to the ongoing security crisis. Those who support terrorists can have no part in this process.”