ISN’T IT HUMOROUS ? YEH IT IS

How the police in America can inflict violence on someone’s child , yet if that person was to beat their child in this way they would be called abusers?
What are police who do this kind of thing called? Better yet what is the law called when things like this happen?..The mother says she wants answers but we need more than answers..What law gives the police the right to beat a teenager in this manner?? 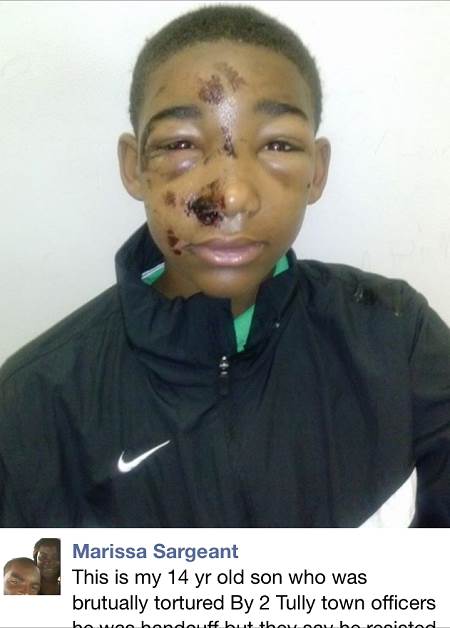 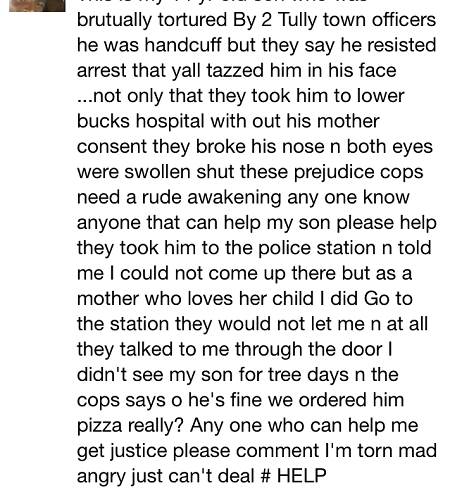 By Tom Sofield & Jeff Bohen November 17, 2013 0 Comments Read More →
Controversy Brewing Over Arrest, Tasering of 14-Year-Old-Boy
The photo of the boy that has circulated on social media. Credit: Facebook

The photo of the boy that has circulated on social media.
Credit: Facebook

Was excessive force used by Tullytown police when they tasered a 14-year-old last week?

That’s the question raised publicly via social media when an images of the bloodied and busied boy spread over the weekend.

Bucks County District Attorney David Heckler said the actions of the borough police officer who fired a single taser barb toward the 14-year-old handcuffed boy as he ran toward busy Route 13 in an attempt to escape “seems appropriate.”

The mother of the boy, Marissa Sargent, and many on social media are calling into question whether the officer’s actions were “appropriate.”

“I know what my son did was wrong, but look at the picture, you think he deserved all that for retail theft?” she told LevittownNow.com exclusively on Saturday morning.

Sargent also alleged her son’s rights were violated because police officials “wouldn’t let me see him at the police station.”

“He’s a minor, I’m his parent, and I should’ve been able to talk to him while I was there” she said.

According to court paperwork first obtained by LevittownNow.com on Friday, the boy was taken into custody along with Jordan Gibson, 19, who has no fixed address, and another passenger, who was not identified in court papers. The arrest came after Tullytown police were called to the Walmart for the group of that were accused of shop lifting $31.93 worth of merchandise on Tuesday at about 2:30 p.m. The F-150 driven by Gibson allegedly sped at “high speeds” through the Levittown Town Center shopping and was then chased by police onto Route 13. Police said the F-150 struck the rear of a car before officers trapped in as it drove into the Route 13 construction zone and took the three retail theft suspects into custody.

Heckler said as the 14-year-old boy sat handcuffed in the back of patrol car he somehow managed to escape and ran for it. A Tullytown officer gave chase on foot, repeatedly yelled for the boy to stop and warned him he would use the taser, Heckler said. After the boy did not comply, Heckler said the officer fired his taser to stop the boy from running handcuffed into busy afternoon Route 13 traffic, where construction barriers would have likely trapped him in the lanes of travel.

“If he would have ran out there and been hit by a cement truck, you’d be hearing a hoo-ha about it,” Heckler said.

One question that will need to be answered is how in fact did a boy handcuffed in the back of a patrol car get free, Heckler said.

Sargent claims the boy was struck in the face by the taser barb and “punched” several times in the face also causing a nasal fracture as the minor and his uncle left Walmart and were approached by authorities. ”He’s going to need surgery now,” she said.

“A mystery shopper”, Sargent said, “saw Jordan take a BB gun from a case and put it into my son’s backpack.”

The alleged BB gun was not listed in the probable cause affidavit filed against Gibson.

Heckler said the boy was actually struck in the shoulder by one prong of the barb and the other stuck in his cheek.

“[The boy] probably turned around to see if the officer was chasing him when the barb caught his cheek,” the district attorney said. “With handcuffs there was nothing to break his fall as his legs gave out.”

The boy’s family said he was released from jail on Friday.

The image of the boy circulated on social media shows swelling and bloodied wounds. Heckler said the boy’s wounds looked considerably worse as swelling set in.

Heckler said the boy did not report police brutality when youth officials talked to him during the week. He added that it was his understanding the boy was on probation, however if the family does lodge a report “county detectives will look into it further.”

Officials confirmed Saturday night that no formal complaint has been filed by the boy or his family with the district attorney’s office or Tullytown police.

“The police department is aware of the misinformation that has been circulating on social media about an arrest made by Tullytown officers. A thorough review of the incident is underway,” Tullytown Police Chief Dan Doyle told LevittownNow.com via phone interview.

Sargent, when asked on Saturday if she was going to file a complaint against the Tullytown Police Department, said, “we’ll be doing that Monday.”