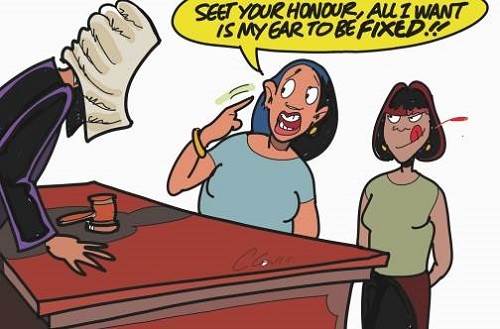 MUFFLED laughter and snide remarks greeted an accused man who was brought before the Corporate Area Resident Magistrate’s Court last week for reportedly assaulting his cousin’s girlfriend, in the aftermath of a dispute with her friend over payment for oral sex at a dance.

The accused, Lee Val Williams, 43, a farmer and construction worker of Lawrence Tavern in West Rural St Andrew, was arrested and charged with unlawful wounding after he allegedly used a Guinness bottle to inflict a wound to the complainant’s face while they were partying at a bar in the Lawrence Tavern Square on November 30 last year.

According to the complainant, Williams, who had paid her friend to perform oral sex on him, demanded a return of his money after the act and got upset and attacked her.

The complainant told the court that they were at a dance when she and her friend were getting ready to leave, but she noticed that her friend had disappeared and went in search of her. She said that she later found her friend in the bathroom at the bar.

“I saw Williams holding her up by the neck and she holding onto her bag,” the complainant said.

The complainant said that when she enquired what was going on, her friend told her that Williams, after paying her for oral sex, had demanded his money back.

According to the woman in her statement, she asked her friend if Williams had climaxed and her friend told her ‘yes’.

However, she told the court that Williams, after seeing her, started to get boisterous while demanding his money and she alerted her boyfriend who came to pacify the situation, but Williams would not relent and threatened to fight his cousin.

“My boyfriend said to him, ‘my youth me an you a blood, me nah war you’,” but was told by Williams that he is a ‘badman’ and would kill him.

The complainant said that Williams then shoved her boyfriend, who pushed him in return and they then ‘started to fist it out’.

She said that during the fight, Williams reached for a Guinness bottle and moved towards her boyfriend but before she could move, he hit her in her face.

As the woman relayed the story there was stifled laughter in the court as persons looked on at Williams with disgust and unflattering comments.

But Williams stood expressionless, neither denying nor confirming the complainant’s report.

However, when he was asked by Senior Magistrate Judith Pusey if he had hit the complainant, he simply replied, “No, maam.”

His bail was extended for him to return to court on March 13.

Two young girls who also faced the court for kicking off a man’s door and breaking into his house were freed after the court heard that one of them was his ex-girlfriend.

Monique Livermore, 20, and Yakeisha Smith, 17, both of Jameson Street in downtown Kingston, broke into the 44-year-old vendor’s house on Smith Lane in downtown Kingston on January 9 and stole his standing fan and three colognes, all valued at $8,030.

Both women were subsequently charged with housebreaking and larceny.

But last Thursday when the matter was mentioned, it was revealed that Smith and the complainant had a relationship.

“We and him a friend and more time we sleep ova him yard,” Livermore said when asked by the magistrate why they had broken into the complainant’s home.

“Why you sleep over his house,” probed the magistrate.

“When we go a party and come in late we sleep over his house,” she answered.

She then told the court that Smith and the complainant were involved and that he owed her something which he promised her and so they broke into his house.

The complainant, who admitted that he had a two-month long relationship with Smith from last November, denied having anything for Smith.

“Me did promise her a money but me give har from Christmas to buy clothes and things,” he said, noting that he did not give her any permission to take anything from his house.

However, Pusey, after checking on Smith’s age to ensure that she had reached the age of consent at the time of the relationship, told both women to go home and made a no-order ruling in the matter.

“Sleep a unu yard,” Pusey warned them as they left the court.

A bar owner who lost a piece of her ear during a fight with her employee told the court that all she wanted is for her damaged ear to be repaired.

Tamara Thomas, who was missing the lower part of her ear, told the court that Lasonya Sergeant, whose employment she had earlier terminated, attacked her at her bar after she told her to stay away from her.

“I heard she had been bad-mouthing me and talking a lot of things behind me and on the day I saw her at my bar and said, “yu nuh hear fi avoid me, and she just grab on pon me ears and when people a draw har off, piece a it come off,” Thomas said.

Sergeant was subsequently arrested and charged with unlawful wounding. But Thomas was also charged with malicious destruction

of property, following allegations that she broke Sergeant’s silver chain during the fight.

However, this was denied by Thomas who claimed that she did not get a chance to retaliate as people had intervened the moment she

According to Thomas, her flat screen television was destroyed during the fight, after Sergeant’s hand accidentally knocked it off the table. But she said she was not interested in the television or having Sergeant punished.

However, Pusey told them that they will have to wait on the medical report and extended both their bails for them to return to court on March 18.

Laughter erupted in the court after the magistrate chastised a driver for bribing a policeman with $1,000.

“You look on the good, good officer and give him $1,000? You don’t even offer him something better than that?” Pusey said to 26-year-old accused Yraerc Creary.

Last Thursday when he appeared in court he pleaded guilty, while noting that he was sorry for his action and that he had apologised to the policeman.

But the magistrate told him that he would have to face the consequence of his actions as he was one of those individuals who was contributing to corruption.

“I have always maintained that in order for there to be an act of corruption, there has to be a corruptee and a corruptor,” she said. “You know you can go to prison for three years.”

“Oh God, no ma’am”, Creary shouted out right away.

“I sorry for you,” Pusey said, as the seriousness of Creary’s action dawned on him.

He then pleaded with the magistrate for mercy, claiming that his action was a mistake. However, Pusey told him that she needed time to think about his sentence and revoked his bail.

He was then remanded into custody and is scheduled to return to court next Thursday.

A businessman was also taken before the court, following allegations that he stole a customer’s gold chain valued at $300,000, after collecting it to fix it.

It was revealed that the accused, Sunil Daswani, after completing the repair, gave the complainant a different chain in return for his expensive jewellery.

But Daswani, who was arrested and charged with larceny by trick, denied the charge last Thursday when he appeared in court.

But the complainant insisted that he was robbed of his gold chain, which he said he had for about 20 years.

“No, the man exchange me gold chain and give me a small one,” said the complainant who was obviously irritated.

Daswani’s bail was then extended for him to return to trial on February 13.

According to allegations, on December 21 last year, the complainant, who is also a businessman, went to the jewellery store on King Street, in downtown Kingston to replace a safety lock on his gold chain.

The matter was then reported, and Daswani was charged.

When cautioned about the allegations, the court was told that he responded: “I am a businessman, I have no reason to steal his chain.”