JAMAICA GETS SOME RAIN FINALLY 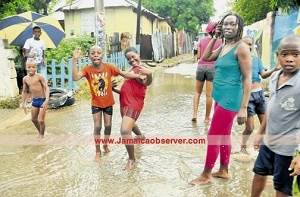 JAMAICANS across the Kingston Metropolitan Area were more than happy for yesterday afternoon’s downpour that sent quenching flows into the long-parched earth, filled empty drums and buckets, and washed away layers of dust that blanketed pretty much everything.
With no consistent significant periods of rainfall since the start of the year, the country has been in the throes of an extended dry season which has resulted in dry pipes and bush fires.
But as the overcast skies gave way yesterday, people clapped, cheered and tweeted. Those without umbrellas braved the heavy drops. Children stripped down and ran outside to play.
“I am so happy for the rain; words cannot begin to describe how I feel,” Dorothy Hinds told the Jamaica Observer. She and her grandson were walking on Mandela Highway in the vicinity of Central Village when the skies burst open.
They did not have an umbrella, but they didn’t seem to mind the heavy raindrops beating down on their heads.
“We really happy for it. Father God shine down on us and I was always confident that He would have come to our rescue,” said Evelyn Cole.
Cole was making her way along Hagley Park Road where long lines of traffic backed up as motorists struggled to navigate around garbage that residents said was forced from blocked drains into the street by gushing water that flooded several drains.
Over on Maxfield Avenue, children ran out of their houses, some clad only in their underwear, to dance in the rain as it poured down.
“Rain, rain, rain,” they sang as they ran up and down the side walk of the busy street.
Back in St Catherine, the town of Linstead, home to the famous Linstead market, was also awash in celebration. Bobette English came out of her house armed with her umbrella.
“I don’t think happy can describe the feeling. I am more than excited,” she exclaimed.
Added Merlin Fearon: “This is something that I really welcome, as we need the rain.”
The Meteorological Service of Jamaica forecast on Wednesday that yesterday would have brought a break in the current drought in the Corporate Area and other areas of the island on account of a trough.
It said afternoon showers were expected in Kingston; a thunderstorm was expected in Spanish Town, St Catherine as well as in Santa Cruz and Black River, both in St Elizabeth; Mandeville, Manchester; Savannah-la-Mar, Westmoreland; Montego Bay in St James; and Lucea in Hanover.
The trough is expected to remain across the region until tomorrow.

0 thoughts on “JAMAICA GETS SOME RAIN FINALLY”