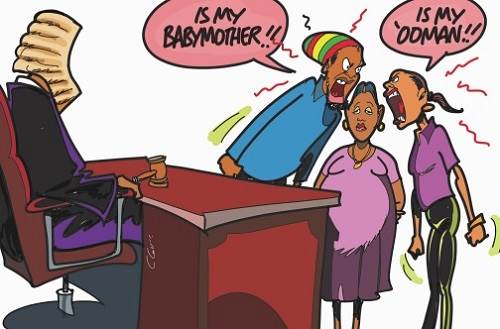 THERE was heightened drama in the Corporate Area Resident Magistrate’s Court last week after the court was told that a pregnant woman was at the centre of a dispute between a Rastafarian man and a lesbian.

The Rastafarian, Sydonie Thomas, was hauled before the court for assaulting the lesbian at her home, which she reportedly shares with the woman in question.

But interestingly, both claimed the woman as their own.

Thomas told the court last Wednesday that the woman is his ‘baby mother’ and is six months pregnant with his child, while the confessed lesbian told the court that she and the woman were together long before Thomas came into the picture.

The complainant told the court that she was at home on the day in question when Thomas picked her lock, grabbed her and started beating her all over her body.

According to the complainant, this was the second time that Thomas was beating her.

However, when Senior Magistrate Judith Pusey asked her what was the reason for the attack, she said that she did not know.

But Thomas told the court that she was fighting him over his ‘baby mother’.

Thomas said that he was invited to the apartment by his ‘baby mother’ who was staying there with a friend who rented the apartment and that the complainant took his clothes and threw them outside and attacked him with a knife.

“She fascinated with my baby mother,” Thomas said, while disclosing that the woman had tattooed his ‘babymother’s’ name on the back of her neck.

“I have it,” the complainant then confirmed. “Me an de girl deh together before him. A him waa kill me to get me out of the way.”

“The security let him in from 10 in the night and him stay there and bleach in him car until 9 in the morning,” she said.

However, Pusey told Thomas that he did not have any right to hit her and ordered him to pay $15,000 or serve six months in prison.

Troubled teen attempts to burn down his mother’s house

A teenager who reportedly attempted to burn down his mother’s home following an argument over a skin bleaching cream was further remanded in custody when he appeared in court.

“Try nuh left go town’ cause you ago hear you phone ring and dem ago tell you dat you house deh pon fire. Me ago bun down you house,” Richard Foster, 18, of Riverton Meadows in Kingston reportedly told his mother before setting fire to a bed in his room at his mother’s home.

Last Thursday when the matter was mentioned, Foster’s mother told the court that he is very disrespectful to her and keeps stealing goods from her shop.

But Foster, in his defence, accused his mother of treating him unfairly.

“She jus waa me dead,” he said repeatedly, while urging his mother to “just talk de truth”.

Pusey, who expressed concern about the state of Foster’s relationship with his mother, remanded him in custody and asked that the probation officer look into the matter.

Foster, who is charged with attempted arson, is scheduled to return to court on January 15.

According to the police report, on September 19 last year, the complainant confronted Foster about a Maxi Light Serum that was missing from her shop when an argument developed between them. Foster reportedly started to curse his mother who then threatened to hit him in the face.

It is reported that Foster then told his mother that he was going to burn the house down.

The mother reportedly contacted the police and told them of the threats, but shortly after noticed that smoke was coming from Foster’s room.

Upon investigation, the mother reportedly saw fire coming from the bed, which contained the serum and other things that were reportedly stolen from her shop.

The fire was extinguished, the police summoned and Foster was arrested.

An alleged robber, who was busted after the complainant saw his profile on Facebook and notified the police, was placed before the court

on charges of robbery with aggravation and unlawful wounding.

The accused, Mario Fritt, 21, a marketing manager of Waterloo Road in Kingston, and another man, reportedly held up the complainant with knives and robbed him of $7,000 and a Samsung Galaxy S2 cellular phone. The complainant also received a cut to his hand during the alleged incident.

Fritt, who was sporting low-cut blonde hair and tested glasses, was, however caught after the complainant saw his profile on the social website and alerted the police, who arrested him during a sting operation

“Because of his looks the complainant could not forget him,” clerk of court, Hansurd Lawson said, eliciting laughter from the court.

“I don’t have a Facebook account but it seems to be a very exciting place,” Pusey remarked.

Fritt, however, told the court that he was innocent and that the complainant had a phone for him and he went and retrieved it.

“This sounds even more exciting than Facebook,” Pusey said, amid laughter, before extending Fritt’s bail.

He is scheduled to return to court on January 14.

The complainant was reportedly held up and robbed along Hope Road in the vicinity of Devon House on December 28.

A woman who was caught trying to smuggle ganja to her son inside the Port Royal lock-up in a box of stewed chicken, escaped a prison sentence.

Hillary Atterbury was taken into custody on Thursday for sentencing on Friday after she pleaded guilty to breaching the Correctional Act.

Atterbury told Senior Magistrate Judith Pusey that she was not aware that ganja was in the food, as she was not the one who had it prepared.

“On the 8th of December I didn’t have anything to give him to eat and his friend cook it and give me,” she said.

According to Atterbury, since the incident she has been trying to get in contact with the friend, but without success.

But Pusey told her that she would have to think about her sentence, as she should go to prison for it, and revoked her bail.

But on Friday when the matter came up, Pusey extended mercy towards Atterbury after Attorney Donald Bryan begged for her.

A businessman who reportedly borrowed the credit card of a woman whom he claimed was his lover, and withdrew almost $800,000 from it after lodging nine fraudulent cheques in the card’s account, was remanded in custody when he appeared in court last Wednesday.

Donavan Campbell of Settlement district, Manchester, was reportedly loaned the credit card to transact business for his auto parts company,

However, last Wednesday when he appeared in court, Campbell denied the allegations and pleaded not guilty to charges of forgery and uttering forged documents.

“Your Honour, Ms Brady and I were in a relationship. She is a Rasta but this woman wants me to do things that I am not interested in, for example…” he said.

However, he was ilenced by Magistrate Lorna Shelly Williams who told him “just stop,” and remanded him in custody.

According to police reports, the complainant loaned her credit card to Campbell last July and shortly after, he left the island.

It is further reported that between July 15 and 26, Campbell lodged the fraudulent cheques in her credit card account and withdrew $793,825 from the account, which had a limit of $52,000.

In September when the complainant returned to the island she was reportedly made aware of Campbell’s action and reported the matter to the police and Campbell was later arrested and charged.

Campbell is scheduled to return to court on January 21.