When Louise Chesney’s besotted fiancé Paul whisked her off to Jamaica to plan their dream beach wedding, she couldn’t have been happier.

She was so in love and says she couldn’t wait to marry her perfect man.

Yet just days into their holiday, handsome local hotel worker Caffrey Brown caught her eye. And one night, after Paul had retired to bed with a headache, they shared a kiss.

Weeks later, Louise, 24, stunned family and friends by calling off her engagement to heartbroken Paul, 48. 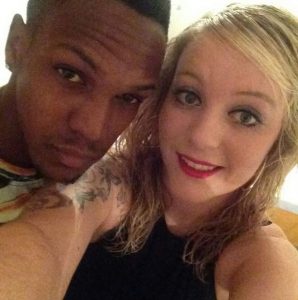 She claims Caffrey, 25, had promised to marry her instead, and love-struck Louise began to plan a life with him in the UK.

She says she spent thousands of pounds on her new beau after she fell for his stories that his family was penniless.

All the while she spent hours filling in paperwork to secure him a temporary visa.

Meanwhile, she also suffered the agony of a miscarriage and the disapproval of her family.

Then suddenly Louise claims she discovered that her Caribbean Casanova had been cheating on her with two other women. She was left distraught, homeless and fearing bankruptcy.

“I’ve been a complete fool,” she says. “My family and friends all warned me he was using me for a visa, but I was so blinded by love.

“I’ve lost everything – I’m thousands of pounds in debt. Yet I’m still devastated at losing Caffrey because I thought he was the love of my life.”

Throughout their year-long relationship, Louise worked six days a week at her minimum-wage care home job to save the £4,000 she needed for two trips to Jamaica to visit Caffrey.

She worked gruelling 12-hour night shifts so that, she claims, she could pay for her lover to visit her in the UK – also footing his visa bill.

When her bank account ran dry, she racked up £3,000 in credit card debt while buying gifts for Caffrey. She claims she spent £10,000 on him.

Louise says: “Paul treated me like a princess, but Caffrey turned my head and told me Paul was too old. Soon I could barely afford to eat because I was sending all my money to him.

“Now I’m all alone. People might say it’s karma, but it still hurts.”

It was in early 2012 that Louise met Paul at the care home where they both worked. “Paul’s age didn’t matter,” she says. “Soon we were speaking about marriage.” The next May, Paul took her to Mexico, where he proposed.

“He took me to a beautiful restaurant where he’d booked a private table on the beach,” she says. “There was a bottle of expensive champagne on the table.

“Paul got down on one knee as the sun set. I burst into tears as he pulled out a beautiful white gold ring with a small diamond.”

Louise was so excited she spent £700 on an ivory wedding gown before the pair had even boarded the plane home. They spent the next two years planning their big day, deciding they wanted a Jamaican beach wedding.

Last spring, they booked a holiday to the resort of Negril to meet a wedding planner.

“We were so in love,” says Louise. “Paul was perfect. Most nights, he’d cook for me and run me a bath. We thought a Jamaican wedding would be perfect. The resort was stunning and the people were so friendly.”

But days into the holiday Louise, of Abingdon, Oxon, spotted Caffrey walking along the beach in just his shorts, and the following evening he introduced himself.

“He shook my hand and instantly I felt what seemed like a jolt of electricity,” she says. “I’ve never had a connection like that with anyone before – even Paul.”

When she says Paul suffered a headache and went to bed, Caffrey invited her to a beach party.

“I couldn’t help myself,” she says. “The chemistry between us was insane. Then we kissed. I tried to resist, but I couldn’t.”

Tortured by guilt, Louise tried to avoid Caffrey for the remainder of the holiday. But back in the UK, she says he sent her daily text messages. And less than a month later, she ended things with Paul.

“He was devastated,” she claims.

In November, she was reunited with Caffrey in Jamaica. “We fell into each other’s arms. That night, we made love for the first time and it was incredible.”

It was only a matter of days before Caffrey proposed. “It does sound crazy as we hardly knew each other,” she admits.

“The proposal wasn’t as romantic as Paul’s. Caffrey got down on one knee and handed me a plain silver band. But I didn’t care because I was so swept up in the romance of it. Then he told me I had to buy him a ring too, so girls would know he was taken. I handed over £300.”

Her family were far from thrilled at her news. Sadly, she suffered a miscarriage shortly after returning home. “My family said Caffrey only wanted a life in the UK,” she says.

“I ignored them and I ran myself into the ground working to send money to him.

“He told me his family were penniless and the hotel kept messing up his wages – I fell for it hook, line and sinker.”

When Caffrey was granted a temporary visa, Louise says she paid for his flight to the UK. “I even paid for him to visit the Etihad stadium as he was such a big Manchester City fan,” Louise says.

“But he was really off with me. He barely wanted to touch me but kept telling me he wanted to get married before the end of the year.”

Things began to unravel when Louise says she received an angry Facebook message from an American woman.

“I got the shock of my life,” she says. “She claimed she’d miscarried his child too. Caffrey told me it had all been a mistake and begged for me back.”

It was only a few weeks later in Jamaica that she discovered he had also been seeing a Canadian girl. “I started throwing things at him,” she says. “I was distraught. He tried to win me back but this time his words were useless. I flew back to the UK a broken woman.”

She claims she had spent so much money on Caffrey she was unable to afford her rent. She had to move in with her brother, far from where she’d been living, so had to give up her job – and now, unable to pay her debts, she fears bankruptcy.

She says: “I can never forgive Caffrey. He still has his happy life in Jamaica and I’ve got absolutely nothing.”

Caffrey was not available for comment, but Paul said: “What happened ruined my life. I’d been married before I met Louise, but she is the first person I felt real love for. I could see what Caffrey was doing as soon as we met him. I had an inkling he’d try to come between us.

“But when I found out about the cheating, it was earth-shattering.

“We’d planned marriage and a life together, and I can’t believe this happened on our dream holiday. Nothing I could say could make Louise see sense. It was a disaster waiting to happen because she was living a life she couldn’t afford.

“We stayed in touch and she told me when she discovered he’d been cheating. I still care about her, so I was gutted for her. Will we get back together? I’m not sure. It’s all still very raw. One thing is for sure though – I will always love Louise.”