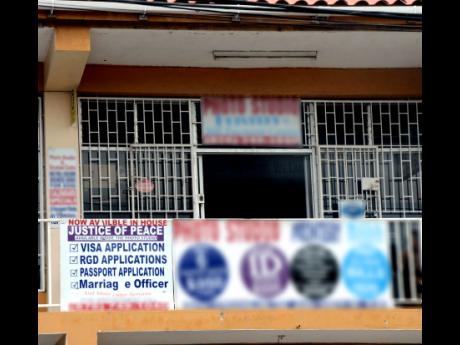 If you are willing to pay as little as $200, then you can get any document signed by at least two justices of the peace (JPs) in Spanish Town, St Catherine, even if they don’t know you.

A Sunday Gleaner probe found the two JPs, kilometres apart, in the Old Capital, blatantly breaking the law and ignoring the rules under which they were appointed by collecting money from persons they do not know to sign pictures, bail recommendations, passport forms, and other documents.

The two JPs are conducting their illegal business in plain sight as signs have been placed in front of the photo studio where they operate, advertising their services.

There are additional signs inside the buildings instructing persons to take a number to see the JP in makeshift offices in the photo studio.

When The Sunday Gleaner visited one of the JPs recently, he asked for an identification (ID) card before signing two passport pictures. When presented with a school ID, which had expired six years ago, the JP signed and stamped the picture before indicating that there was a $200 charge for this service.

At the second photo studio, there were signs stating that “the JP will not engage in fraudulent, corrupt or otherwise unlawful activities”.

Another sign stated, “The office of the justice of the peace is a voluntary one and functions on the judgement of the JP … the JP must know you for at least one year.”

There was also a sign indicating that the JP requires the presentation of valid identification.

But it appeared that these signs were just for show as the JP accepted the expired school ID presented by our reporter and demanded his $200 fee.

Custos of St Catherine, the Reverend Jeffery McKenzie, dissociated his office from the two rogue JPs, even as he admitted that investigations were under way into allegations that a JP in the parish has been charging for his services.

McKenzie said the JPs seen by The Sunday Gleaner were not from St Catherine, noting that their official stamps started with the letter ‘D’.

“The justices in this parish have the letter ‘F’ at the start of the number on their stamps, and the governor general has just handed me the roll of JPs in the parish,” said McKenzie.

Justice Minister Mark Golding, when contacted by The Sunday Gleaner, said he was not aware of any rule prohibiting JPs from providing services in parishes other than where they were appointed.

Golding, however, denounced the practice of JPs collecting money for their services.

“This kind of investigative journalism is very useful, because it will highlight once again to the JP cohort out there that this is unacceptable behaviour,” said Golding.

“It is well known, I believe, that justices of the peace provide voluntary service and, therefore, any JP who is charging for the type of services that JPs are expected to offer is acting outside of the expected norms and rules that govern that office,” the minister added.

He noted that if credible information is presented that a JP is collecting for his services, there is a procedure under the law for addressing it.

“If at the end of the day the findings of that process are that the JP acted improperly and brought the office into disrepute accordingly, then the matter is referred to the Ministry of Justice and I then make a recommendation to the governor general in relation to that person’s appointment, and they could be removed from the roll,” said Golding.

Golding said fewer than five matters have resulted in action taken against a JP in the last three and a half years.

He argued that this was not a very high ratio, considering the number of JPs on the island, but accepted that there could be rogue JPs operating without being caught.

“So I am not trying to tell you that the practice (of JPs charging) is very rare. I am pretty sure that it is not the norm, but I do believe that it does arise from time to time.”

He said some JPs have written to him expressing a desire to charge for their service, but this would not be permitted.

“When they applied for the office they knew it was a voluntary office and the Government is not in a position to pay JPs … not for their ordinary services such as signing documents and that sort of thing,” said Golding.

“We expect the JPs to be honourable and to perform their office in accordance with their oath and the rules.”