JUSTUS SAY IN MEMORY OF ROACH 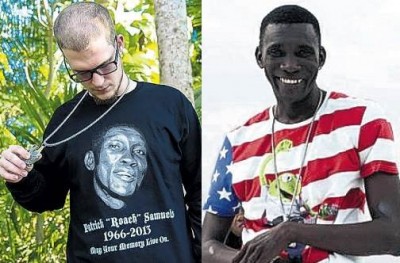 IN memory of his late mentor music producer Patrick ‘Roach’ Samuels, dancehall producer Justus Arison has released the Tribute Riddim.
“Me jus waan mek sure Roach’s memory and legacy is kept alive. Him woulda celebrate him 47th birthday last Friday, so me jus release it pan da date deh. A him send me a road and mek mi make mi name inna dancehall,” Arison, 27, told the Jamaica Observer yesterday.
Produced on Arison’s JA Production label, Tribute Riddim contains five tracks. Among the artistes featured on the rhythm are Munga Honorable, Blak Ryno, I Shawna and Chi Ching Ching.
“Roach’s 12-year-old son, Dami, makes his debut with a tribute song to his father on the riddim,” said Arison. The single is titled RIP Father Roach.
The American-born Arison — who grew up in Jamaica, said he is forever grateful for Samuels for giving him his break.
“I was doing music for over 10 years and when Roach forward, within a year, I was a known producer… this was 2010-2011,” he said.
Samuels was shot multiple times on Manning’s Hill Road shortly after he left a party last year. He rose to prominence with the Siren beat, a take on Quincy Jones theme song from Ironside, the 1970s American television show.
Two songs on the Siren ‘riddim’, Sean Paul’s Break Out (from the multi-platinum The Trinity album) and Vybz Kartel’s Emergency, were hits.
Samuels and Arison co-produced the Overproof riddim which spawned the hit songs Settle Down (Mavado), Caribbean Girl (Aidonia) and Tun Up Di Ting (Khago).
“Every day his spirit is still with me. We jus a push on… he wouldn’t want it slow up,” said Arison.

25 Users Online
Back to top